Procter & Gamble Co. (P&G) pocketed $1.5 million this month by selling another 6,800 square feet of land to General Electric (GE), which was needed to build GE’s new corporate headquarters next to P&G’s Gillette division in Boston.

The parcel along the Fort Point Channel brings the size of GE’s campus to 2.7 acres, which means at least half of it qualifies as the open space needed to obtain a state waterfront permit. 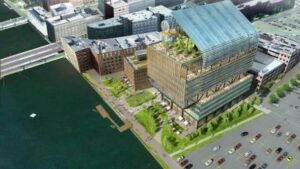 The parcel along the Fort Point Channel brings the size of GE’s Boston campus to 2.7 acres, which means at least half of it qualifies as the open space needed to obtain a state waterfront permit.

The bulk of the parcel in Boston’s Fort Point neighborhood was bought by Connecticut-based GE for $25.6 million, while the state agency MassDevelopment bought the buildings and about one acre for $57.4 million. GE intends to redevelop the former Necco candy manufacturing buildings on that parcel and lease them back from MassDevelopment.

P&G was encouraged by Boston city officials to sell the 2.5-acre tract for the GE headquarters. The new land deal was revealed Jan. 30, 2017 during a Massachusetts Department of Environmental Protection hearing on GE’s application for a license to build on filled tidelands, according to the Boston Globe.

The smaller parcel sold by P&G, which reportedly is part of the Harborwalk along the water, is now owned by MassDevelopment.

GE plans to build a 12-story office tower. The redevelopment of the site and construction of the tower are expected to cost about $200 million, which doesn’t include the $83 million paid to P&G.

Up to 800 GE employees are expected to work at the site when the tower is completed. Construction is to begin in the next few months and be completed in early 2018, the same year GE expects to occupy the two existing buildings.

The Gillette campus included a total of 26 buildings and the portion GE bought isn’t close to the main headquarters building for the shaving division of P&G. The land purchased for the GE headquarters fronts the Fort Point Channel and includes a parking lot used by P&G employees.