Home > December 2013 > CARB and The Dept. of Toxic Substance Control

CARB and The Dept. of Toxic Substance Control

The California Air Resources Board (CARB) continues their work on Consumer Products. On Oct. 23, the CARB research division held its first meeting on the  Low Vapor Pressure (LVP) Research Study Contracts to be conducted by University of California, Riverside (UCR) and the University of California, Davis (UCD). During the meeting, both universities explained the activities they will preform on the LVPs during their individual studies. After the presentations, the universities requested a list of chemicals to be tested from the Industry. Industry has developed a list and presented it to CARB. We hope, as we go to press, that by the end of November this list will have been completed.

On Nov. 5, CARB held another meeting to discuss finalization of the Sept.  26 board hearing amendments and a preview of future activities. CARB should release the fifteen-day notice for the board hearing soon. As far as future activities go, the next steps for CARB will be to develop surveys for the industry. Likely the industry will work with CARB through the first part 2014. Then the survey will likely be released around the middle of 2014.

Therefore, next year we will be busy with developing survey forms and monitoring LVP research.

A reminder: as of the end of this year the following changes at CARB take place (see charts). Remember, any product made before this deadline and properly date coded can be sold for three years. 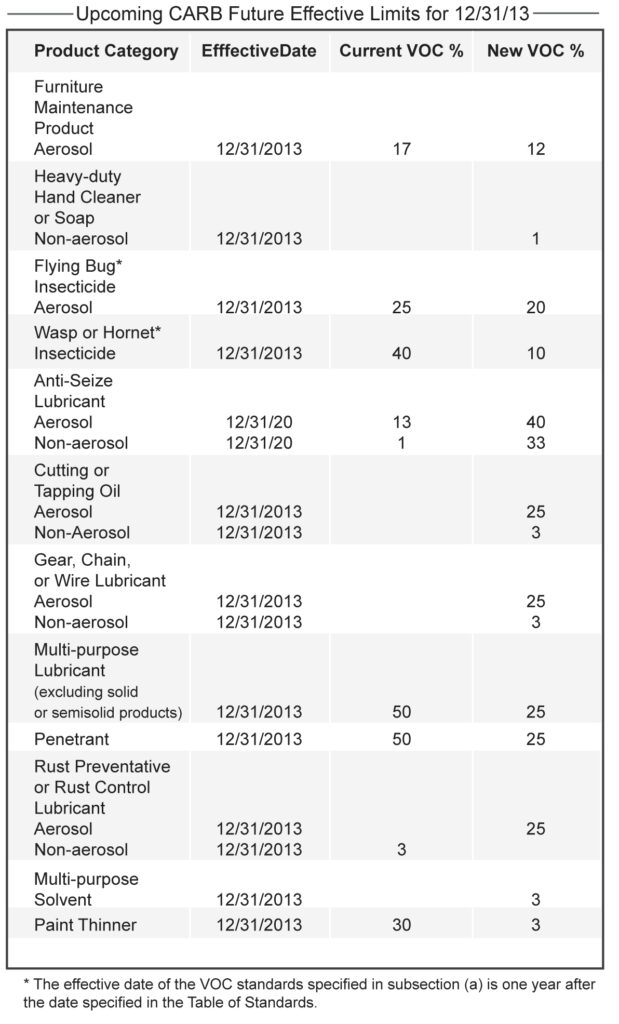 Here are some updates for the Safer Consumer Products Regulation that went into effect on Oct. 1, 2013. The Dept. of Toxic Substance Control (DTSC) will release the priority products by at least April 1, maybe earlier. The DTSC has indicated that they will likely only work on three products/chemical combination at the beginning, then possibly expanding the total to five.

A Guidance Document for the Alternative Assessment (AA) Part One should be released at the end of 2013 or early 2014. The Part One guidance document covers the first phase of the AA, with Part Two, covering the second phase of the AA, is planned for release in the first quarter of 2014.