The Alliance for Consumer Education (ACE) is a not-for-profit foundation that works to promote the safety, health and well-being of children, families and communities. Its tireless efforts to keep consumers and future- consumers informed and healthy have increasingly gained momentum in recent years.

Inhalant Abuse Prevention is ACE’s flagship program. It began in 2002 with a website (www.Inhalant.org) and informational brochures, and has since increased its visibility and community outreach tremendously. More growth and visibility is expected this year now that ACE’s new Honorary Chair is U.S. Senator Herb Kohl (D-WI). 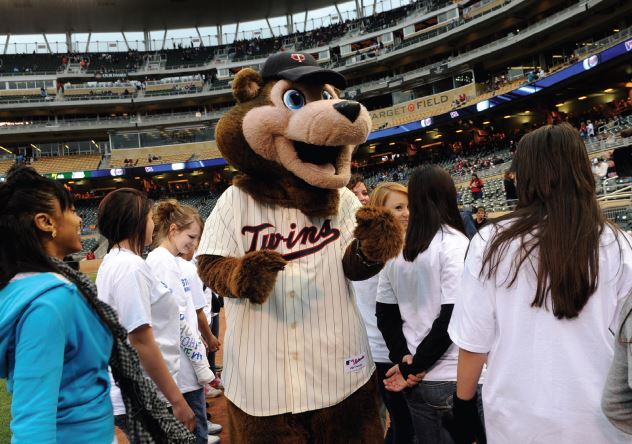 Strike!
Though the website is a key component to the program, ACE also employs a grassroots community-based approach as well. Last summer, ACE expanded its Strikeout Inhalants baseball program to Major League Baseball. It partnered with the Minnesota Twins to officially launch its Minnesota state program with a Strikeout Inhalant Abuse night with 38,809 fans (near capacity) in attendance at Target Field. The event included a co-branded Strike Out Inhalant Abuse poster, an on-field pre-game ceremony which featured a “Great Strikeouts in Twins History” montage played on the JumboTron and introduction by Minnesota Teen Challenge, local Students Against Destructive Decision (SADD) spokespersons and youth volunteers. There was also a public service announcement created for the Strike Out program with Twins pitcher Glen Perkins. 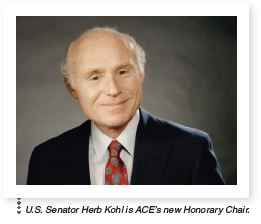 The Twins Strike Out Inhalant baseball game was just the beginning of ACE’s efforts in Minnesota. Following the game, ACE also assembled a full state coalition including state agencies, public health associations, school  associations and community groups to continue the preventative campaign throughout the year. ACE also has baseball initiatives in other communities in cooperation with the Eastern Aerosol Association (Camden Riversharks of NJ) and Southern Aerosol Technical Association (Gwinnett Braves of GA).

NIPAW
Several years ago, ACE took the inhalant abuse prevention message to retailers in another grassroots initiative. ACE worked with a mother who lost her son to inhalants to create something special for National Inhalants & Poisons Awareness Week (NIPAW). Over 500 brochures were displayed on Giant Foods and Stop & Shop pharmacy counters throughout the Mid-Atlantic & New England regions.

As seen on TV
ACE strives to work with people to help them share their stories in an effort to put a human face on inhalant abuse. ACE developed a public service announcement with TV show A&E Intervention; it included “Allison” and her family. When Allison was featured in an Intervention episode concerning huffing, it was one of the most-watched episodes in the series. When producers for Intervention: In-Depth (a follow-up show) heard about Allison’s involvement in educating others and working with ACE, they decided to feature the public service announcement at the end of its new episode. 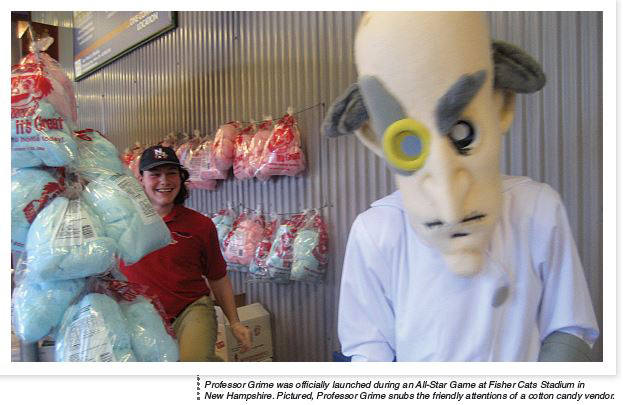 PAIN
ACE is in the midst of finalizing its People Against Inhalants Network (PAIN) website, a brainchild of ACE Board Trustee Sgt. Jeff Williams. He wanted to create a place for people who lost loved ones to inhalant abuse can go to share stories and experiences. Sgt. Williams lost his son to inhalant abuse and has since been a leading voice in raising awareness of the issue nationwide. PAIN will include testimonials, information about the topic and key tools and resources needed to address the issue. The site will also highlight all the positive work people are doing locally so others can use the example as a template to follow within their own community.

ACE’s other active program, Disease Prevention, has come a long way since its inception in 2005. Back then, the cornerstone for the program was an award-winning website (www.StopGerms.org) that continues to inform visitors on simple steps to keep their families safe and healthy. Since then, ACE has continued to build upon its online presence while incorporating efforts on the ground. 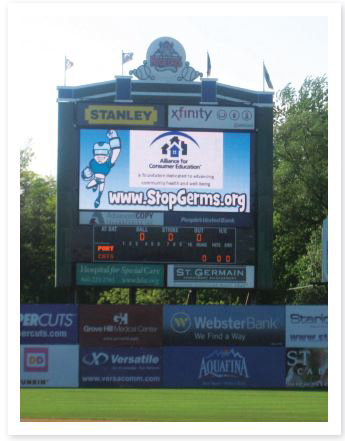 ACE Clean vs. Professor Grime
ACE created a mascot for the program,—“ACE Clean”— to reach children and their parents. ACE Clean was unveiled at a New Britain Rock Cats’ (AA affiliate of the Minnesota Twins) Minor League Baseball game in Connecticut. All children who attended the game received baseball cards feaururing ACE Clean and Rocky, the Rock Cats mascot with healthy tips printed on the back. In addition to the cards, signage about hand-washing and positive disease prevention messages appeared throughout the stadium. Because the launch took place in the midst of National Nurses Week, ACE highlighted nurses by publicly thanking them and having two local nurses address the crowd on the importance of hand washing. The New Britain Rock Cats took the message a step further by setting up convenient hand washing stations at various areas in the stadium.

At the same game, the ACE Clean Trivia Challenge was officially launched. Created as a joint partnership between ACE and the Consumer Specialty Products Association’s Cleaning Products Division, the Jeopardystyled online trivia game is designed to teach players about good health through cleanliness and proper hygiene practices. During pre-game activities, two Boy Scout troops competed on the field and online game was also made available to all in the stadium that day, as a trivia station was set up by the front gate.

ACE Clean’s nemesis, “Professor Grime”, was launched at the Eastern League All-Star Game at the Fisher Cats (AA affiliate of the Toronto Blue Jays) baseball stadium in New Hampshire. The day before the All Star Game, ACE attended the All-Star Block Party in an effort to engage the public and distribute information. There was a pre-game face-off prior to the start of the All-Star game where Professor Grime appeared on the field chasing a group of young kids; however, ACE Clean arrived to save the day. A mini-script was read giving brief background on the characters and encouraging all to visit StopGerms.org to learn how to stay healthy. As ACE Clean and Professor Grime were on hand to give autographs and interact with passersby, the table remained very popular.

The Henry the Hand Foundation invited ACE to work with the Clean Hands Coalition to help promote International Clean Hands Week. As a result, ACE Clean was invited by the U.S. Dept. of Agriculture to attend its Harvest Festival. The mascot has been very well received by adults and kids alike.

ACE Clean is no stranger to teaming up with other characters. ACE and the Association for Professionals in Infection Control and Epidemiology (APIC) partnered with Marvel Entertainment on an educational book cover that features images of ACE Clean and superhero Iron Man, healthy tips, and word jumble/word search activities. Over 90,000 of these book covers have been distributed to New York City classrooms.

To announce the project, ACE held an event in Times Square, where ACE had sole use of the Reuters and NASDAQ billboards that morning. ACE Clean also attended the event alongside Marvel’s Iron Man. The two superheroes teamed up to educate the public about disease prevention via hand washing demonstrations. Passersby also lined up to take photos with ACE Clean, images which were then projected up onto the Reuters and NASDAQ billboards. The event culminated in a press conference at Midtown Comics with ACE, CSPA, APIC, Marvel Entertainment and the American School Counselor Assoc.

ACE continues to receive calls to appear in communities and schools across the country. The latest being from the Public Relations Society of America (PRSA) asking the ACE to present at its International Health Academy Conference.

Heroes of the Health League Finally, ACE launched its newest program, Heroes of the Health League, in 2011. The program is an all encompassing look at the home, and highlights poison prevention, recycling, proper disposal and storage, pet safety, fire safety and sustainability concepts (light usage, water usage, recycling, etc.). The premise is an interactive game available online at www.ConsumerEd.org where children explore various rooms of a house and complete mini-games while learning how to keep their homes safe and healthy. 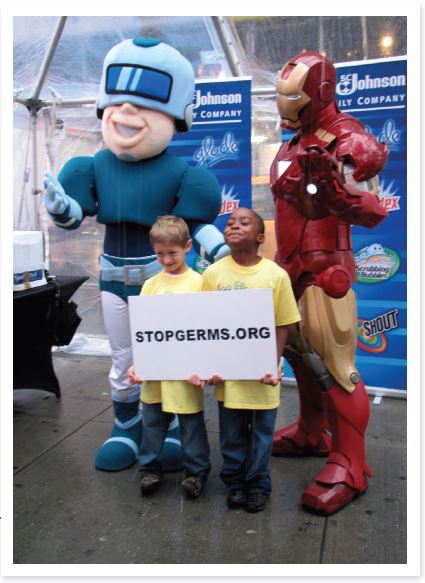 The program’s interactive website was consumer tested to ensure the content and layout would be an effective learning tool. The beta version of the website obtained a 91% approval rating from parents. Heroes of the Health League launched last summer at the Bowling Green Hot Rods (Single A affiliate of the Tampa Bay Rays) baseball stadium in Kentucky. Local kindergarten students celebrated their graduation by participating in an on-field “parade of heroes” alongside fellow community heroes including first responders, firefighters, etc. During the game, tables were set up on the stadium concourse where kids could visit the program website to learn about the issues, play the online games and create their own Hero badges. The site proved even more popular than ACE had anticipated.

2012 has started off strong for ACE by having a national partnership with SADD to develop an inhalant abuse prevention curriculum to be used in SADD’s peer-to-peer mentoring program in their middle school chapters across the country. Looking to the future, another high visibility partnership taking place in 2012 is in the works that will surely strengthen ACE’s programs. Stay tuned!