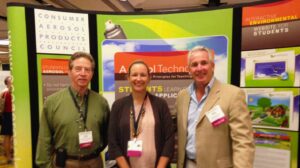 Representatives of The Consumer Aerosol Products Council (CAPCO) recently exhibited at the 2014 National Resource Recycling Conference in New Orleans, LA. It was the second time that CAPCO attended the event that brings together professionals throughout the recycling industry, including material recovery facility (MRF) operators, waste haulers, equipment suppliers and recycling coordinators for local municipalities.
Also in attendance were some of CAPCO’s key partners, the Steel Recycling Institute (SRI) and Keep America Beautiful. CAPCO was able to make connections with new organizations to further its goals of increasing awareness about the recyclability of aerosol products among consumers; getting more recycling programs to accept empty aerosol products; and communicating its acceptance more consistently on carts and bins, waste-hauler and municipality websites and via other educational outlets.

Mark Rivers, VP, Technical Services at Aeropres Corp., catches the football of leadership at the Consumer Specialty Products Association (CSPA) Annual Meeting in Ft. Lauderdale, FL in December. Bill Wood, President of Faultless Starch, bequeathed his responsibilities as Chairman of the Aerosol Division to Rivers with the symbolic pass. 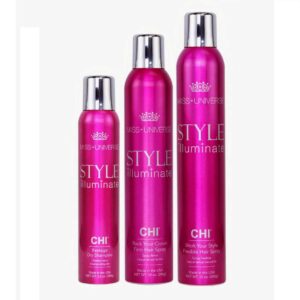 Farouk Systems will launch The Miss Universe Style Illuminate Line by Chi nationwide at the 63rd Miss Universe Pageant, set to air on NBC on Jan. 25. The host site will be Florida International University in Doral, FL. For over a decade, Farouk Systems, together with its Chi Hair Care brand, has partnered with and sponsored the Miss Universe Pageant. Both Chi Hair Care and the Miss Universe Style Illuminate Line will be used by Chi’s styling team, which will attend to the styling needs of nearly 90 contestants from different countries around the world.
According to Farouk Shami, Farouk Systems Founder & Chairman, “The Miss Universe Organization is well-known for empowering women and encouraging them to have the confidence they need to succeed in today’s world. We are honored to share this same passion and vision.”