Avoiding a patchwork of State regulations for high GWP HFCs

W hen I joined the household and commercial products industry more than a decade ago, the foundation for regulating the volatile organic compound (VOC) content of consumer products had long been established. I never truly appreciated the hard work that went into ensuring the consistent State regulations that, dare I say, we enjoy.
Now, we face the challenge of establishing regulations for high global warming potential (GWP) hydrofluorocarbons (HFCs). Federal regulations to address the use of high GWP HFCs were partially vacated by court decisions 1, and, as a result, 15 States 1 have either passed or are currently working on legislation or regulations to phase out certain HFCs, with more States expected to take action.
The Household & Commercial Products Association (HCPA) has been working hard to ensure that high GWP HFC legislation and regulations for aerosol products are consistent between States for aerosol products. Despite the fact that the aerosol industry has
already moved away from the use of high GWP HFCs, with the exception of a few critical uses, there have been proposed State actions that could negatively impact the entire aerosol industry. HCPA continues to advocate for consistent legislation and regulations
among States that will not disrupt the distribution of aerosol products. 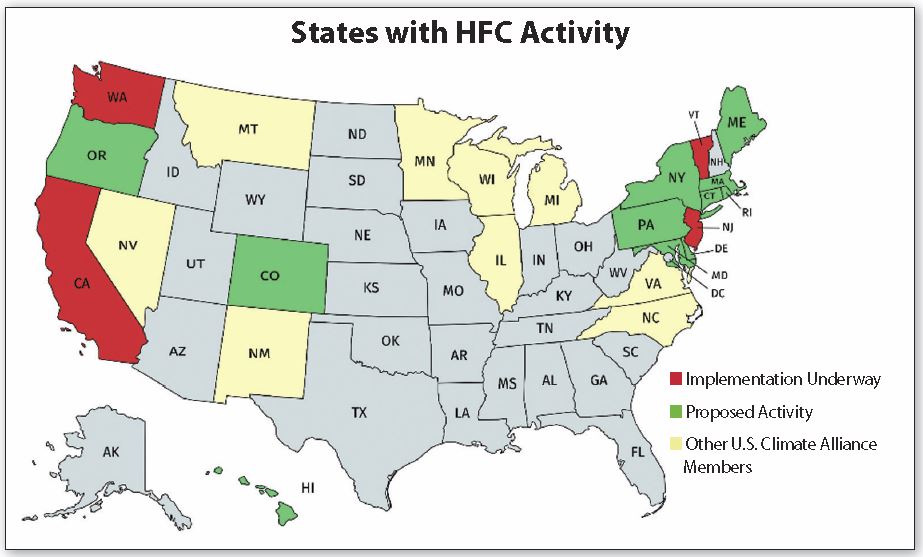 The Federal government is currently working on potential legislation to direct the U.S. Environmental Protection Agency (EPA) to phase down the use of HFCs, but States are no longer waiting for that. States that have taken, or are working on taking, action to regulate the use of high GWP HFCs are using the EPA Significant New Alternatives Policy (SNAP) Program Rules 20 2 and 21 3 as their basis. This, and the fact that each State addressing
high GWP HFCs is a member of the U.S. Climate Alliance (a bipartisan coalition of States focused on the objectives of the 2015 Paris Agreement), has helped create a framework for exactly which substances are being examined (any HFC with a GWP greater than 150) and which uses are exempt from such action (exempted uses in the EPA SNAP Rules are kept in each State).
While developing a consistent approach may sound simple enough, it gets more challenging as we get into the weeds. For example, States have different requirements for recordkeeping and disclosure. Not all States require recordkeeping or disclosure, but
when States discuss what they want, it often conflicts with Federal regulations or exceeds current industry practices.
Examples of disclosure requirements include listing high GWP HFCs on the product label, labeling a substitute (which would apply to all aerosol propellants because of how the proposals are being written) or adding a phrase indicating State compliance, which would
require a label change to every aerosol product sold in the U.S.
The HCPA has pushed back on these disclosure requirements, especially the last one, and has been working with States to utilize existing Federal labeling requirements and safety
data sheets within their disclosure requirements.
For the States that are looking at recordkeeping requirements, they often exceed the requirements found in the consumer product VOC regulations and HCPA has pointed to existing recordkeeping requirements for what States should utilize.
HCPA will continue to work with any State that wants to restrict the use of high GWP HFCs so that we avoid a patchwork of State requirements. By developing consistent regulations, States can help reduce HFC emissions without imposing undue impediments
to interstate commerce.
Whether you are interested in HFCs or other aerosol topics, such as tariffs or recycling, I would encourage you to attend HCPA’s Mid-Year Meeting, IMPACT2020, on April 22–24 in Washington, DC. If you have any questions, please contact me at [email protected] SPRAY