Indeed, it doesn’t stop there. There are cologne’s called Superman (from CEP), Batman (from Marmol & Son) and a cosmetics line from MAC called Wonder Woman. In 2001, Rochas even launched a men’s scent called Aquaman, but that seemed to be geared more toward sophisticated poolside types rather than in tribute of the gilled superhero who speaks to oceanic creatures. And while a quick call to my old boyfriend from the 8th grade could probably produce a few more examples, you no doubt get the picture.

Who is the target audience for these fragrances? It’s hard to say exactly. Teenagers? Highly likely. The Peter Pan-esque man-boys that have dominated popular culture (and real culture) since the mid-20th century? Also very likely. Collectors of funky fragrance bottles? Maybe.

What does seem certain is that superhero scents are an offshoot of the celebrity fragrance phenomena. If celebrity fragrances add a bit of Hollywood glamour to a perfume or cologne, then superhero scents add a bit of Hollywood fun. Every year, trend forecasters comment on the waxing and waning of celebrity scents, declaring popularity and sales are either surging or declining. However, the reality is that they aren’t going anywhere. Twenty one years after Elizabeth Taylor launched White Diamonds with Elizabeth Arden and ten years after Jennifer Lopez launched Glow by J.Lo with Coty, both scents are still going strong. Sure, many other celeb scents have and will crash and burn, but no more than any other, more traditional offerings. 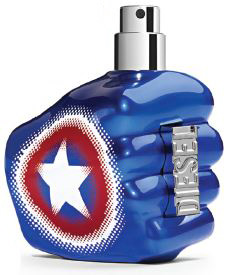 According to http://celebrityperfumestore.com, no less than 40 celebrity fragrances have been launched so far in 2012. This doesn’t sound like a waning category to me. Far from it. Our New Fall Fragrance feature (p.16) features but a few, however they are indeed numerous, and still very much fashionable and sought after.

More fall fragrance launches can also be found in our Seasonal Products feature found on p. 12. As always, we hope you enjoy this issue.