Just in time for the holidays, an industry-wide shortage of canned whipped topping, such as Reddi-Wip, appears to be looming after a fatal explosion at a Florida nitrous oxide plant in late August stunted the supply chain, according to an article in the Chicago Tribune. 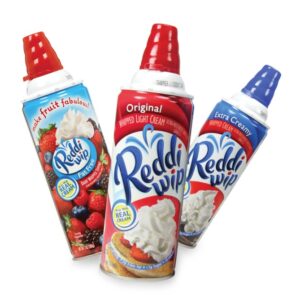 ConAgra Brands, the Chicago-based food manufacturer that makes Reddi-Wip, confirmed Dec. 12 that its supply of nitrous oxide—a propellant for aerosol toppings—was affected by the blast. Spokeswoman Lanie Friedman said stores still have the product in stock, but supplies may be limited in the peak holiday season, when consumers are indulging in pies, hot chocolate and other desserts that call for whipped cream.

“It’s in stores now, but we’re encouraging people to buy it early,” Friedman said. “There will be a shortage if people buy at the typical levels during the holidays.”

Reddi-Wip is the leading aerosol whipped topping, according to sales data from IRI, a Chicago-based market research firm. In the 12-month period ending Nov. 27, sales exceeded $278 million, which represented an increase of almost 9% from the same period a year ago, according to the IRI retail sales figures, which do not include Costco.

Friedman stressed the shortage isn’t ConAgra’s problem alone, but extends to all food products that use nitrous oxide. That would include the spray-can versions of Cool Whip, made by Kraft Heinz, which is headquartered in Chicago and Pittsburgh. Kraft Heinz spokesman Michael Mullen declined to comment.

The explosion at the Airgas-owned Nitrous Oxide Corp. facility in Cantonment, FL, had far more dire consequences than a whipped cream shortage, said the Chicago Tribune. One Airgas employee was killed in the blast. A company investigation into the cause of the accident is still ongoing, Airgas spokeswoman Sarah Boxler said in an email.

The plant’s operations were affected “indefinitely” and the company’s supply of nitrous oxide—also used for medical purposes—was temporarily limited, Boxler said. As Airgas has built its supply back up, the priority has been on meeting the needs of its medical customers, not food manufacturers.

“Airgas Nitrous Oxide is making all possible efforts to remedy the situation as quickly as possible and impacted customers have been notified directly,” Boxler said.

One of ConAgra’s co-manufacturers is an Airgas customer, hence the impact on Reddi-wip. Friedman declined to disclose the name of the co-manufacturer, citing company policy.

Representatives of retailers Jewel-Osco and Mariano’s said they still have plenty of Reddi-wip in stock. At least one Chicago-area Heinen’s Fine Foods store had a sign displayed recently, warning customers of a shortage.

Reddi-wip was invented by Aaron “Bunny” Lapin in 1948, first selling the product through St. Louis milkmen, according to the brand’s website. Lapin, who was later dubbed the “Whipped Cream King,” died in 1999 at age 85.