According to German aerosol association Die Industrie-Gemeinschaft Aerosole e.V. (IGA), there was a slight increase of 0.4% in the production of aerosols in Germany in 2011. There were 1.355 billion cans filled, with various product categories developing very differently. Aerosols are produced not only for the German market, but for the European and global markets, as well. Categories are broken down into aluminum and steel containers; IGA indicated that aerosol products filled in glass and plastic containers
represent such small numbers that the can’t be reported in detail. 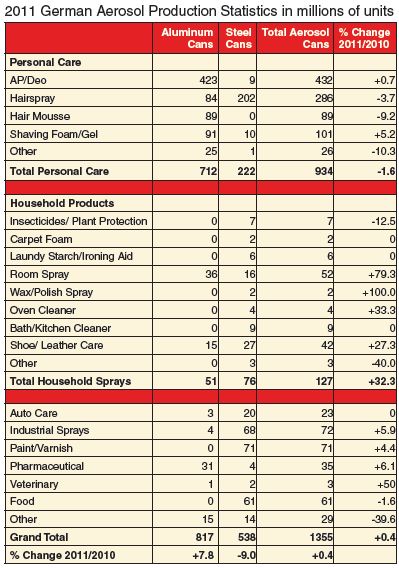 The losses in Personal Care were offset the increases in Household care aerosol production, which hit 127 million in 2011, with a growth rate of over 32%. In fact, 23 million more Air Fresheners/Room Sprays were filled in 2011 than 2010, an increase of nearly 80%. Shoe/Leather Care products grew over 27%. Most other Household Care categories showed positive growth, as well.