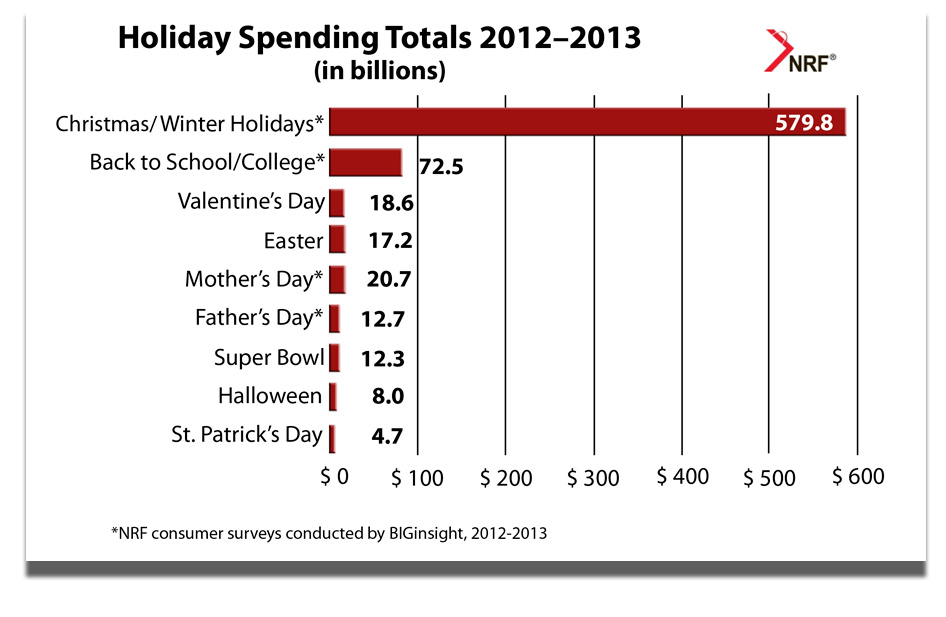 Holiday helpers for bath and kitchen

Also for guest or home use is Philosophy Holiday Hands, a set designed to stay close to the sink to give hands a treat. The hand wash gel and hand lotion crème come in a Cranberry Currant fragrance and are color coordinated in holiday red. Both sets of products feature the Euroflow pump from Aptar Beauty + Home.

Perfect for entertaining is Liquor Whipped premium vodka-infused whipped cream in White Chocolate Peppermint. The Temperance Distilling Co. delicately blends the flavors of natural chocolate and peppermint with the light creamy texture of decadent whipped cream; it then infuses the perfect amount of premium vodka for that extra little kick to top off drinks or desserts. Liquor Whipped comes in a festive, holiday-

themed can from DS Containers that sports a valve from Clayton Corp.

Love is in the air

And in the malls. A 2013 Valentine’s Day spending survey conducted by BIGinsight indicated the average U.S. consumer spent approximately $130.97 on gifts, candy and cards, up from $126.03 in 2012; total spending was approximated at $18.6 billion.

“Valentine’s Day remains one of the biggest gift-giving holidays of the year, and although consumers will be conscientious with their spending, it’s great to see that millions of them are still looking forward to celebrating with their loved ones,” said NRF President & CEO Matthew Shay. “Recognizing their customers will shop for both price and value, retailers…will offer plenty of promotions for anyone looking to spoil those that mean the most to them this February 14th.”

Victoria’s Secret has a bevy of new products to be given and/or worn on Valentine’s Day. 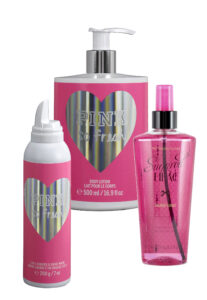 PINK So Fresh Body Lotion has a light scent of vanilla orchid and airy musk, and packs an instant moisture infusion of aloe, oat and grapeseed extracts, as well as vitamins E and C. PINK So Fresh 2-IN-1 Shower & Shave Wash is a double-duty foaming mousse, creating a fluffy lather for gentle cleansing and smooth shaving. Nourishing jojoba oil and aloe vera leaves skin smooth and soft. Both products are wrapped with VS’s iconic shocking pink label and embellished with a holographic heart. Victoria’s Secret Fantasies limited-edition Sugared Florals collection includes a body mist scented with a blend of sugared lilac and praline, and infused with conditioning aloe vera. All three products feature packaging from Aptar.

Sales of U.S. prestige men’s fragrance increased 6%, to $953 million, from May 2012–April 2013, according to global market research firm The NPD Group’s 2013 Men’s FragranceTrack study. In that time period, 25% of U.S. male consumers purchased a pre-packaged gift set as a result of the perceived value, and the ancillaries included in the set. Larger fragrance sizes presented a value benefit as well. Unit sales of men’s fragrance, in sizes 6.7oz and up, increased 12% from May 2012–April 2013 compared to the previous year. These larger sizes represented more than 6% of dollar sales during the same timeframe.

“Men, and those who purchase fragrance for them, are spending 4% more on fragrances than they did a year ago,” explained Karen Grant, NPD Group VP & Senior Global Industry Analyst. “With a quarter of adult men who wear fragrance saying that they never purchase it for themselves, fragrance becomes the perfect, low stress gift for the man in your life. His scent selections don’t vary much, his requirements are generally basic, and if you like it, it is almost certain he will like it,” she concluded. 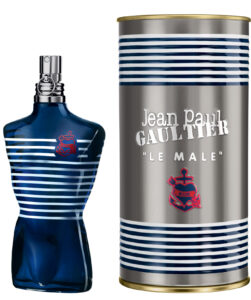 Paul Gaultier. The 75ml EDT has notes of lavender, mint and vanilla. It comes in a bottle from Pochet du Courval, featuring the iconic striped jersey (image, lower left), this time with a bright red heart tattoo on the chest, suitable for Christmas or Valentine’s Day gift giving.

Prestige women’s fragrance dollar sales increased 8% while units were up 3%, and the average price was up 5% in the first quarter of 2013, compared to the same time period last year, according to The NPD Group.

“Women are spending more on their fragrances than last year, treating themselves to something a little more special,” said Grant. “Higher price points are driving the growth in sales.”

Women’s fragrances priced $100-and-up grew almost 40% in sales, account for 22% of dollar sales and have surpassed the sales of women’s fragrance gift sets under $100 (20% of dollars). Despite this, gift sets gained 9% in sales in the first quarter of 2013 compared to the same time period last year. 2013 Rank

Eau de parfum (EDP) options represent 62% of the market, and showed gains, but it was colognes, with a 4% share of women’s fragrance, that displayed a significant double-digit increase in dollars. Within women’s cologne, the growth was driven by niche brands, which accounted for 90% of the segment’s dollar sales in the first three months of 2013.

“Colognes offer women lighter concentrations and allow them to get the scent they desire without feeling overwhelmed,” said Grant.

Prestige women’s fragrance dollar sales increased 8% while units were up 3%, and the average price was up 5% in the first quarter of 2013, compared to the same time period last year, said NPD.

Just in time for the fall and holiday seasons, iconic fragrance brand Lolita Lempicka delivers a new scent that radiates femininity and love—Elle L’aime. The scent marks Lolita Lempicka’s biggest U.S. launch in over a decade. Elle L’aime (which translates to “She Loves”) is comprised of top notes of bergamot, neroli and lime; mid notes of coco essence, jasmine and ylang-ylang; and base notes of vanilla, myrrh and sandalwood. The scent was created by Christine Nagel and Serge Majoullier of French fragrance house Mane and is housed in a bottle representing a golden totem pole.

Estée Lauder unveiled Modern Muse, its first major perfume launch since Beyond Paradise in 2003. Perfumer Harry Fremont of Firmenich expressed the duality of the composition by creating a two-

Chicago-based boutique fragrance development company Tru Fragrance announced the second harvest of Tru Blooms, a first-of-its-kind initiative that originally debuted in 2012. This year’s project will transform even more of Chicago’s gardens and green spaces into growing spaces to cultivate flowers that will be harvested and bottled into a limited edition perfume.

Tru Fragrance partnered with perfumer Stephanie Hakes of Ungerer & Co. to capture the essential oils and essence of the flowers to create the limited edition Tru Blooms Second Harvest Eau de Parfum, which will be available in two sizes—50ml and 15ml at select locations and online beginning in November. Pre-orders will begin online on October 14.

Tru Fragrance also announced Honey as the HipNote for the fall season. A versatile scent that adapts attributes from its origins, honey can be woodsy, floral or herbal. HipNote Honey comes from the Acacia shrub, giving it a complex sweetness and delicate, floral aroma. It features top notes of delicate freesia, hedione and muguet, which evoke the feeling of a fresh fall breeze, blooming flowers and a vision of bees working effortlessly in a scenic garden.  The scent was crafted by perfumer Pierre Negrin of Firmenich. SPRAY