DS Containers celebrated its 10th anniversary with an open house at the aerosol can company’s Batavia, IL plant. The event featured a tour of the facility, as well as food and refreshments. William Smith, founding CEO of U.S. Can Co., established the company as a partnership with Japanese Daiwa Can Co. in 2004 before commencing production in 2005. 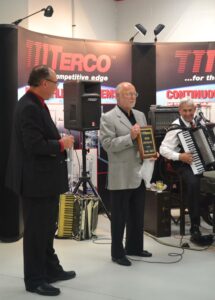 Terco, manufacturers of aerosol filling systems, commemorated its 50th year of business with a celebration at the company’s Bloomingdale, IL facility. Dennis Ahrens, CEO, was presented with a 50th anniversary plaque to mark the occasion, and 25-year company veteran Owen Rue, who passed away in July, was remembered. Terco was founded in 1965 and has since developed a global network of distribution, sales staff and technical service personnel.