In May, 16 senators came together to introduce a consensus bill, known as the Lautenberg-Vitter Chemical Safety Improvement Act of 2013 that will focus on those areas of the Toxic Substances Control Act (TSCA) that are in most need of reform.

“The introduction of bipartisan legislation to strengthen TSCA represents a breakthrough for modernizing chemical regulation in the U.S. Senators Lautenberg and Vitter deserve great credit for their commitment to move this measure forward,” said Ernie Rosenberg, President & CEO, The American Cleaning Institute (ACI).

“ACI and our member company cleaning product manufacturers and suppliers have been pressing for common sense, bipartisan legislation to strengthen the law and reassert American leadership on chemical management. We know that there are still many details to work through and much language to review. However, getting to this stage raises the hope that TSCA can be updated in a way that truly protects consumers and allows manufacturers to innovate and produce increasingly sustainable products for many years to come,” commented Rosenberg. 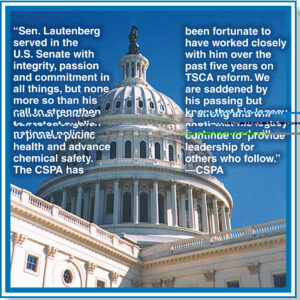 “Developing reasonable and necessary revisions to update the TSCA statute is vitally important to CSPA and its member companies,” added Cathcart. “CSPA has consistently advocated modernizing TSCA and we applaud these efforts. Updating TSCA can only be achieved with bipartisan support. The bill is needed to support the ability of industry to innovate and compete in an evolving and vital marketplace.”

According to CSPA, it has collaborated on how best to ensure the U.S. Environmental Protection Agency (EPA) has appropriate and necessary use and exposure information to support a risk-based, chemicals management program in the U.S. As part of this, maintaining essential protections of confidential business information is critical to competitiveness and innovation.

“We appreciate that Senators Lautenberg and Vitter have provided an opportunity for stakeholder dialogue. This has allowed us to work through questions and issues in an effort to narrow our differences and move toward a consensus,” said Cathcart.
CSPA has identified key priorities under TSCA that include the following:

“In putting forth a broadly bipartisan bill, Senators Lautenberg and Vitter demonstrate how Congress should work to address significant policy. We have spent several years actively discussing TSCA reform with members of the U.S. Congress, the NGO community and business, and this bill reflects many of the thoughtful ideas we have heard in those discussions. The Chemical Safety Improvement Act provides a sound basis for legislation that can pass the U.S. Senate and bring needed change to the U.S. chemicals management regime,” Fisher concluded.