Aerosol dispensing firm LINDAL Group has marked its 60th anniversary by hosting a series of exclusive celebratory events with its 1,200 employees. 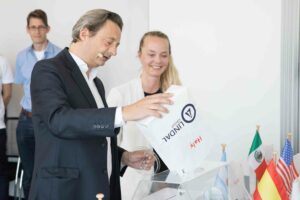 In the run up to the company’s anniversary on June 7, members of staff from its 14 international locations have taken part in events to acknowledge their loyalty and diligence within the family-run business. Local celebrations also took place with employees and their families.

As part of the activities, hundreds of LINDAL employees from around the world tuned into a live broadcast delivered by Katharina Lilienthal, Shareholder representing the family, last Friday. Lilienthal said: “It was hugely important for us to honor our 60 years in business by giving something back to our employees, many of whom have stood with us beyond retirement age and remained loyal to LINDAL for generations. I wanted to do this personally and reach out to everyone in our entire business.”

During the live recording, Lilienthal announced the winners of a 60 Years Special Lottery which all employees were entered into. Ahead of the broadcast, a LINDAL best memories competition was also organised, giving each staff member a chance to submit their favorite memory of the 60-year-old company. The contest received dozens of entries and over 300 pictures in just under two weeks.

Many of the memories submitted in the competition paid tribute to former owner Peter Lilienthal who passed away on April 6th, 2017. He ran the business for 25 years during which time he turned it into a market leader in aerosol packaging technology. His reign over the business followed on from his father, Johannes Lilienthal who first founded the company, 1959. Well respected and widely regarded as one of the pioneers of the aerosol industry, Johannes was also known for his fairness with staff members and his unwavering enthusiasm for the business.

Lilienthal said: “Through our activities, we wanted to demonstrate our commitment to and acknowledgement of our employees, and to celebrate the rewards of hard work and dedication instilled by both my father and grandfather.

“Our employees and the work they do continues to be the lifeblood of our company and by recognizing and celebrating this, we are keeping alive the legacies left behind and securing an exciting future for everyone at LINDAL.”