LINDAL’s Bag-and-bag (BAB) technology is utilized in a new antiseptic foaming wound cleaner—HemaScrub by Med Scrub Inc. Designed for professional and consumer use in the medical and veterinary markets, HemaScrub is a dual-action wash that mixes two formulations at the point of dispensing to treat wounds more effectively by “foaming out” dirt and grime using a dual-vortex dispensing system, mixes the cleanser and dispenses two sprays simultaneously. 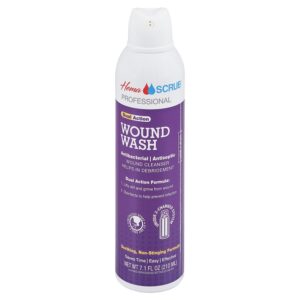 “From the moment we learned about LINDAL’s BAB technology we knew it was exactly what we were looking for in a spray can form delivery system due to its capabilities in keeping ingredients separate and stable before being dispensed,” said Med Scrub Inc. Director & Medical Developer, Anthony Talamonti.

Additionally, the BAB technology uses compressed air and formulations can be dispensed at an ambient temperature to avoid shocking with ice cold propellants. The formula can also be dispensed in any direction from the can, with 360 ° usability, and does not produce a hissing sound, which can frighten animals.

BAB incorporates compressed air, sealed packaging, continuous dispensing and has a 96–98% evacuation rate depending on product viscosity. BAB has two product chambers inside the same can. Each chamber can contain potentially incompatible formulations. The two products mix at the time of use or after application, if required. LINDAL’s BAB uses a Bi-Power valve which supports a streamlined filling process and provides consumers with equal distribution of the two products.

LINDAL recently won the FEA (European Aerosol Federation) Packaging Element Design award for BAB. The jury acknowledged the benefits of the Bi-power valve as well as the flow limitation concept managed in the actuator instead of the valve thus allowing a faster filling.

“It’s been a pleasure to be a part of the journey with Med Scrub Inc.,” said LINDAL’s North America Sales Director, Alex Piagnarelli, who led LINDAL’s development team for the HemaScrub Cleanser dispenser. “We are excited to see this unique new offering on the market where we believe it will be readily adopted.”

“The team at LINDAL proved a huge support from finding the best filling partner, to choosing the correct container and nozzle sizes for components,” said Talamonti. “They have demonstrated not only the high quality of their products, but also their continued willingness to go the extra mile.”