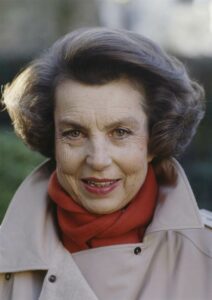 Bettencourt, listed by Forbes as the world’s richest woman, was the heiress to the beauty and cosmetics company her father founded just over a century ago as a maker of hair dye.

Her death opens a new phase for L‘Oréal, France’s fourth-largest listed company, altering the relationship it has with key shareholder Nestle, the Swiss food company.

Bettencourt and her family owned 33% of the company. Her daughter Françoise Bettencourt-Meyers, who sits on L‘Oréal’s board along with her own son, said in a statement the family remained committed to the company and its management team.

“My mother left peacefully,” Bettencourt-Meyers said, adding that she had died during Wednesday night at her home in Paris.

“I would like to reiterate, on behalf of our family, our entire commitment and loyalty to L‘Oreal and to renew my confidence in its President Jean-Paul Agon and his teams worldwide.”

In 2011, Agon was appointed Chairman & Chief Executive of L‘Oréal, owner of the Lancŏme and Maybelline beauty and make-up brands and of Garnier shampoos.