CARB
The California Air Resources Board (CARB) staff is continuing with its next round of volatile organic compound (VOC) reductions for Consumer Products.

The following schedule is mostly webinars with one in-person workshop on Oct. 4: 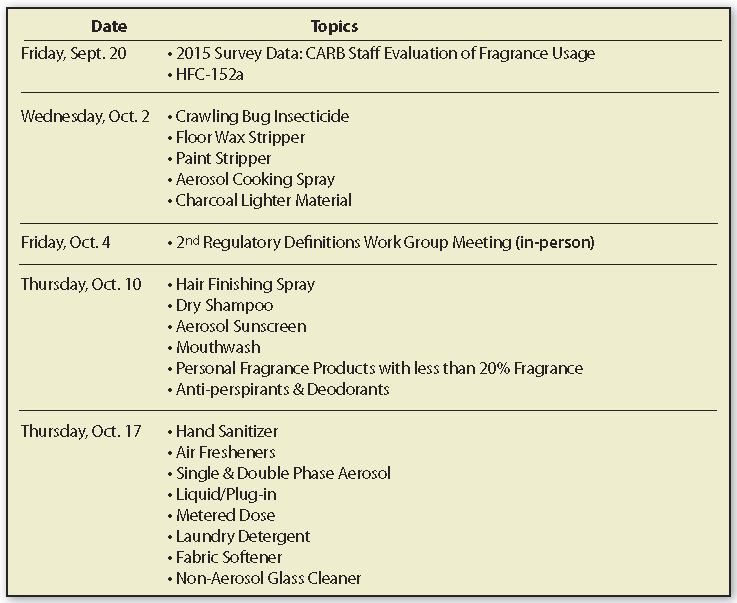 As you will notice, CARB is also reviewing a few other topics besides product categories. First, CARB is reviewing the definition currently in the rule. This will be done on Oct. 4, so if there are definitions you believe need work, feel free to contact CARB. Next, CARB staff is having a webinar on HFC-152a and Fragrance Usage. For Fragrance, the 2% exemption is being reviewed. This could affect a significant amount of products.
New to the list is the issue of HFC-152a being used as a tool to reduce VOCs. HFC-152a is a global warmer and currently there are no restrictions on the use of this compound. CARB will discuss its approach to HFC-152a.
If your product category is targeted, consider meeting with CARB to discuss these issues.
Remember, CARB staff needs 4 TPD of reductions by 2023 and a total of 8 TPD by 2031. CARB will get its emission reductions with or without your assistance. If it’s without your assistance, the outcome may not look very good for you.

Colorado
In July, the Air Quality Control Commission (AQCC) adopted the new Consumer Products Rule and Architectural & Industrial Maintenance (AIM) Coatings regulation. This rule was to be finalized in August. I have not seen the final rule, but it will come into effect on May 1, 2020. Therefore, start preparing now. It will happen.

New York & New Jersey VOC regulations
New York State has stated that it will adopt a new version of its Consumer Products regulation. No timing has been set.
New Jersey is also planning to update its regulation. On Sept. 6, 2019, New Jersey had a public meeting to discuss its proposal, as well as a pre-regulatory proposal. The Garden State is considering adopting the Ozone Transport Commission (OTC) Rule #5. If this happens, New Jersey will be the first State to adopt it. Remember, all of the OTC rules are modeled after current CARB rules. Thus, if you can comply with CARB then you will also comply with all the OTC Model Rules including #5.
Industry is pushing for OTC Model Rule #4 because numerous States are using it. However, the OTC stated it might be willing to put off the effective date of this rule for possibly up to three years. I think we should consider this option. Comments on this proposal are due by Oct. 4, 2019.
In addition, New Jersey will adopt OTC AIM Model Rule #2 for Coatings.

DOT
On Jan. 1, 2011, the U.S. Dept. of Transportation (DOT) published a final rule to eliminate the use of ORM-D for Consumer Commodity Shipments. Originally the deadline was Dec. 31, 2013 but the deadline has been extended to Dec. 31, 2020.
Starting Jan. 1, 2021 ORM-D marking should no longer be used. This gives you more than year to move everything through the pipeline. SPRAY