CARB/SCAQMD
Meetings with South Coast Air Quality Management District (SCAQMD) and California Air Resources Board (CARB) management continued on July 8 in Sacramento, CA. Industry representatives met to discuss future regulation of Consumer Products targeted by SCAQMD. Currently, SCAQMD is not targeting any Consumer Products and stated that only limited VOC reductions will be needed for the next State Implementation Plan (SIP). We will need to monitor District activity, but this is good news for now.

CARB
As of Jan. 1, 2017, the volatile organic compound (VOC) limits for three aerosol adhesives will be lowered. There is less than a year and a half to meet these new limits. The following categories have future effective dates.

Now is the time to start preparing for these future effective VOC limits set by CARB. If at all possible, try to reformulate your products now because if you have a problem with reformulation, we need to contact CARB sooner than later.

In addition, on Jan. 1, 2017, all the General Aerosol limits and some of Specialty Aerosol Coating limits become effective in the following categories: 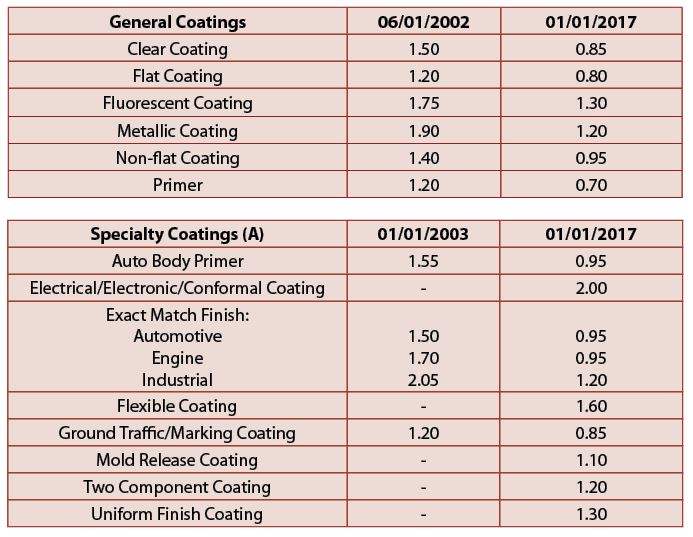 LVP-VOC Studies
CARB staff provided an update on the University of California, Riverside study of low vapor pressure (LVP) VOCs on Aug. 21. This is the study involving the chamber study work. More testing on certain compounds will be done and the study will likely be ongoing into next year. We will need to evaluate all of the data then.

EPA/ SNAP
On Sept. 11, 2015, the U.S. Environmental Protection Agency (EPA) held a meeting in Washington D.C. to exchange information with stakeholders on the Significant New Alternative Policy (SNAP) Program. Remember, EPA just finished an amendment process, which severely affects the use of HFC-134a in aerosols. This meeting discussed the consideration of next steps, which hopefully don’t affect aerosols. More on this in the next issue.

OTC
The Ozone Transport Commission (OTC) Stationary Source Committee held its regular quarterly meeting on Sept. 10 in Washington D.C. As of late, OTC has not made much headway with getting the EPA to adopt the OTC Model Rules.