The Vicissitudes of Aerosol Air Fresheners

One might say that the air fresheners in use today began ignominiously as space deodorants in subway stations and safe houses during the Nazi bombings of London in 1943. Atomizers sprayed diluted hexylresorcinol into the air of these over-crowded shelters to kill air-borne bacteria and protect the health of people standing there for many hours.

Hexylresorcinol had been synthesized by Dohme, et al, in Germany during 1926, and a few years later it was recognized as an anthelmintic (used to destroy parasitic worms) and topical antiseptic. By about 1935 it was pronounced to be a space bactericide. When disposable aerosols became commercial in 1947, hexylresorcinol was considered but probably not marketed since triethylene glycol had been found to be at least eight times more effective in the killing of airborne bacteria. It was also easily purified and less costly. 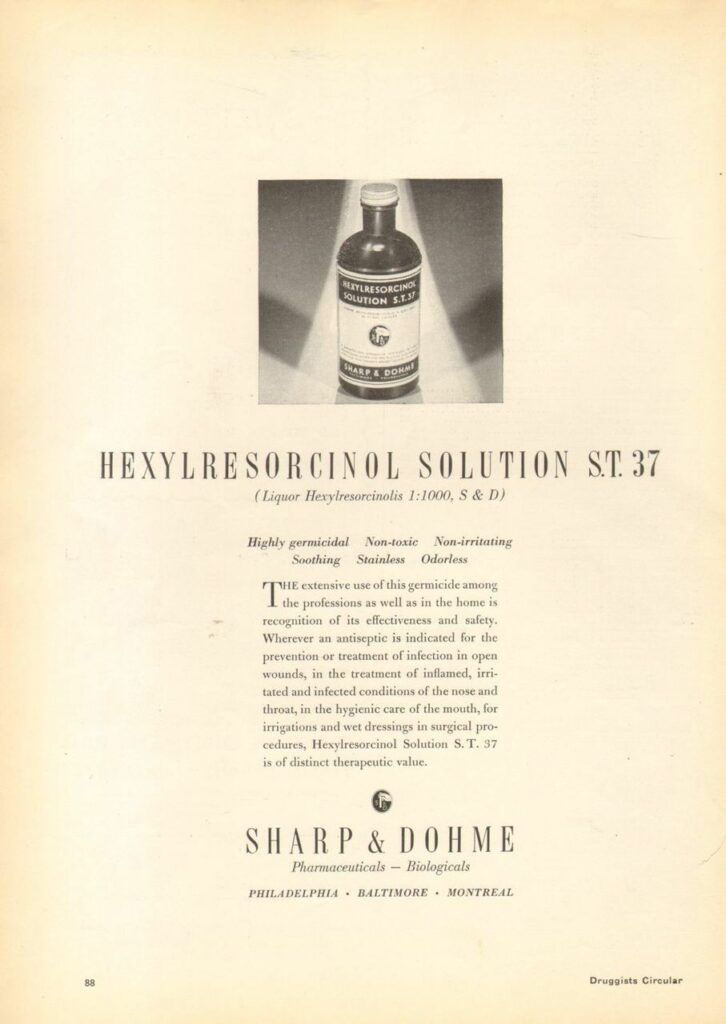 A few small firms marketed aerosol space bactericides in 1947. They had to be approved by the U.S. Dept. of Agriculture (USDA), who administered U.S. Patent #2,321,023 to Lyle D. Goodhue and William N. Sullivan. However, if the label identified the product as a space deodorant, federal registration could be avoided. Survey data by DuPont indicated that no room deodorants were marketed in 1947, although probably a small number were commercialized late that year. The figure for 1948 was 2 million, and this grew to 3.5 million in 1949. By 1957, the market was 44 million, according to DuPont. 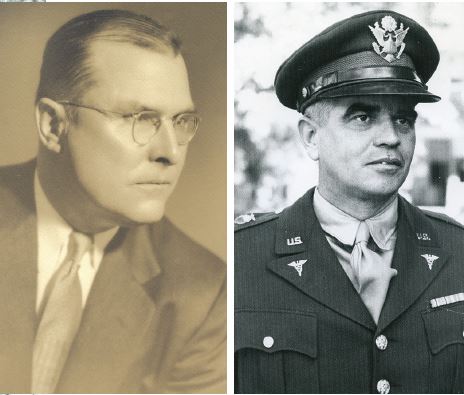 The very early air deodorants contained formulas with 2.5% to 7.0% triethylene glycol, although about 2.9% was sufficient to treat an average room. Other glycols were sometimes included to about 3% but (like propylene glycol) they were only about 10% as effective as triethylene glycol. Glycols, being somewhat polar, were generally insoluble in the hydrofluorocarbon (HFC) propellants. So a co-solvent, such as ethanol or odorless mineral spirits (OMS), was needed.

Fragrances were added, almost as an afterthought, to give the consumer a feeling of accomplishment. The propellant was about 85% of an equal mixture of non-flammable CFC-11 and CFC-12. This provided a nice spray, with particles averaging about 12 microns in aerodynamic diameter; they were small enough so they could hang in the air, evaporating most of their initial size over a few minutes. This caused a pleasing intensification of the fragrance odor. Delivery rates were generally about 0.75 grams per second (g/s). For a typical 6oz. (170g) fill, the dispenser could be sprayed for about 3.9 minutes before becoming empty. A formulation would then be:

As always, management and formulators were assiduously looking for ways to reduce product cost. During 1955, a contract filler in Danville, IL found a way to purify isobutane, making it essentially odorless, and then mixed it with a chlorofluorocarbon (CFC) blend of about the same pressure, maintaining the non-flammability of the blend. It was called Propellant A and was an immediate success. An air deodorant formula would be:

During 1954 and 1955, the fledgling aerosol industry became very interested in flammability. Under the Chairmanship of Clarence “Pete” Clapp, a Flammability Committee was formed within the Chemical Specialties Manufacturers Association (CSMA—the forerunner of the current Household & Commercial Products Association [HCPA]). In collaboration with Dr. R.A. “Bus” Fulton of the Interstate Commerce Commission (ICC), three test methods were devised: Flame Propagation Test, Closed Drum Test and Open Drum Test. They were used to develop formulations that were marginally non-flammable, mainly by reducing the costly, non-flammable CFC propellants. Since the triethylene glycol formulas had vanished by this time, the new compositions were far simpler:

The level of fragrance changed from about 0.25% to 1.50% according to its odorous intensity. One major marketer preferred a blend of 45% CFC-11 and 55% CFC-12 to achieve a slightly smaller particle size. The Gulf Research & Development Co. used its parent company’s Gulflight odorless distillate instead of OMS, since the two were virtually indistinguishable.

Deodorizing additives
While fragrances could replace or mask unpleasant odors to varying degrees, the industry was anxious to actually destroy odors, if possible. One possibility was to add a compound with an electron-deficient area, which would then attract electron-rich odorant sites. The covalently connected bad odor and deodorant would then have little or no odor. The osmophoric (bad odor) site would include divalent sulfur (-S-) and trivalent nitrogen (- N=) locales. Other mechanisms have been proposed, including absorption. There are more than 50 U.S. patents touting the ability of various compounds to suppress bad odors.

Air Wick 4-in-1 Air
Freshener from Reckitt
Benckiser comes in premium
fragrances, such
as Vanilla Indulgence.

One early counter-odorant was cocoyl methacrylate, trade named Metazene. It is mainly a mixture of lauryl, myristyl and hexadecyl methacrylates. The supplier is Alpha Aromatics, Inc. and it can be purchased in various strengths, including 100%. The deodorizer was a commercial item as early as about 1945. It is typically used in aerosols at about 2.0%, but has many other applications as well.

Another venerable deodorant is trade named Meelium, said to have been developed and sold originally by the Gulf Oil Co. Its composition is unknown, although a phenanthrolene ring structure is rumored. It is currently marketed by Alpha Aromatics. It exists as a dark red liquid, typically about 40% active and almost odorless.

As mentioned, a veritable constellation of other purported deodorants have been described. Some have been marketed, such as 3,5,5-trimethylhexanal, various geraniols and fumerates. Most languish in U.S. Patents, where information about their odor-suppressing abilities is generally quite vague.

Water-based air fresheners
The relatively high cost of the CFC propellants spurred the industry to look for alternative non-flammable formulations. In 1960, a Danville, IL filler devised one. It contained about 61% of de-ionized water, so it was called “water-based.” This major advancement saved marketers about 10¢ per 6oz. can. Perhaps surprisingly, a presentation to a major marketer was initially rejected because its technical executive thought hydrocarbons had a very bad odor. Later, when samples were evaluated, that false impression vanished and the company began marketing a kindred formula very successfully within a year.

The key to the water-based products was to emulsify up to about 32% hydrocarbon propellants using a non-ionic water-in-oil (w/o) surfactant.

Unlike the more commonplace non-ionic oil-in-water (o/w) emulsifiers that created foam bubbles when sprayed, these low hydrophile-lipophile balance (HLB) surfactants provided reasonably small non-foamy particles. Some commercial formulas worked with as little as 0.12% emulsifier and 30% isobutane A-31 propellant. Unlike the anhydrous CFC types, these products had to be shaken before use. The emulsions were meta-stable, with the first sign of propellant separation taking place in about 90 seconds as a thin, clear top layer.

The stratospheric ozone depletion issue led to a ban of all CFC propellants in the mid-to-late 1970s. By then, virtually all aerosol air freshener products had been converted to water-based formulas, so there was almost no direct effect. However, in 1975, the aerosol industry’s product unit volume plummeted about 31% and did not fully recover for a decade. Some experts, such as the late Douglas Fratz (HCPA Senior Science Fellow), were of the opinion that the ozone debacle cost the industry about 1.0 billion units per year during every year since 1975. The unit volume of air fresheners decreased from about 250 million to fewer than 200 million per year during that trying decade.

Major marketers, such as Colgate, S.C. Johnson, Reckitt & Coleman and Renuzit, remained guardedly optimistic—launching new fragrances and can designs—but reducing their advertising to a pessimistic consumer audience. By about 1991, the California South Coast Air Quality Management District (SCAQMD) began agitating against aerosols and related products, claiming climatologists were convinced that they were indirectly contributing to excessive amounts of ozone in the troposphere. The affected industries fended off the SCAQMD accusations for a few years, until the State Congress charged the much larger California Air Resources Board (CARB) to address the problem. During its early years, CARB’s Peter Venturini informally stated that CARB would have to reduce the volatile organic compound (VOC) content of aerosols and kindred products by about 85% to meet its ultimate goals and promise to the U.S. Environmental Protection Agency (EPA) via State Implementation Plans (SIPS). Today, years later, it would appear that his comment was essentially correct.

CARB began by defining the characteristics of a VOC—the organic substance would have to exhibit a vapor pressure of over 0.10 mm Hg, have 12 or fewer carbon atoms per molecule and have a half-life of less than three months in the troposphere. On that basis, the above water-based formula would have OMS and A-46 as VOCs, for a total of 37.465%.

About 1994, CARB released its first compendium of mandatory VOC limits. Water-based air fresheners were identified as two-phase products limited to 30% VOC content. The industry responded by creating formulas such as:

Water is typically hard to break up into small particle sprays and there were fewer hydrocarbons to do so. The result was a coarser spray pattern than before. Some consumers complained about seeing particles falling onto tables and floors. Marketers responded by giving directions to shake the dispenser and then aim it high into the air before spraying. In some cases, the concentration of fragrance was increased. The use of MB-U (Mechanical Break-Up) Reverse Taper actuators and reduced delivery rates were also helpful. 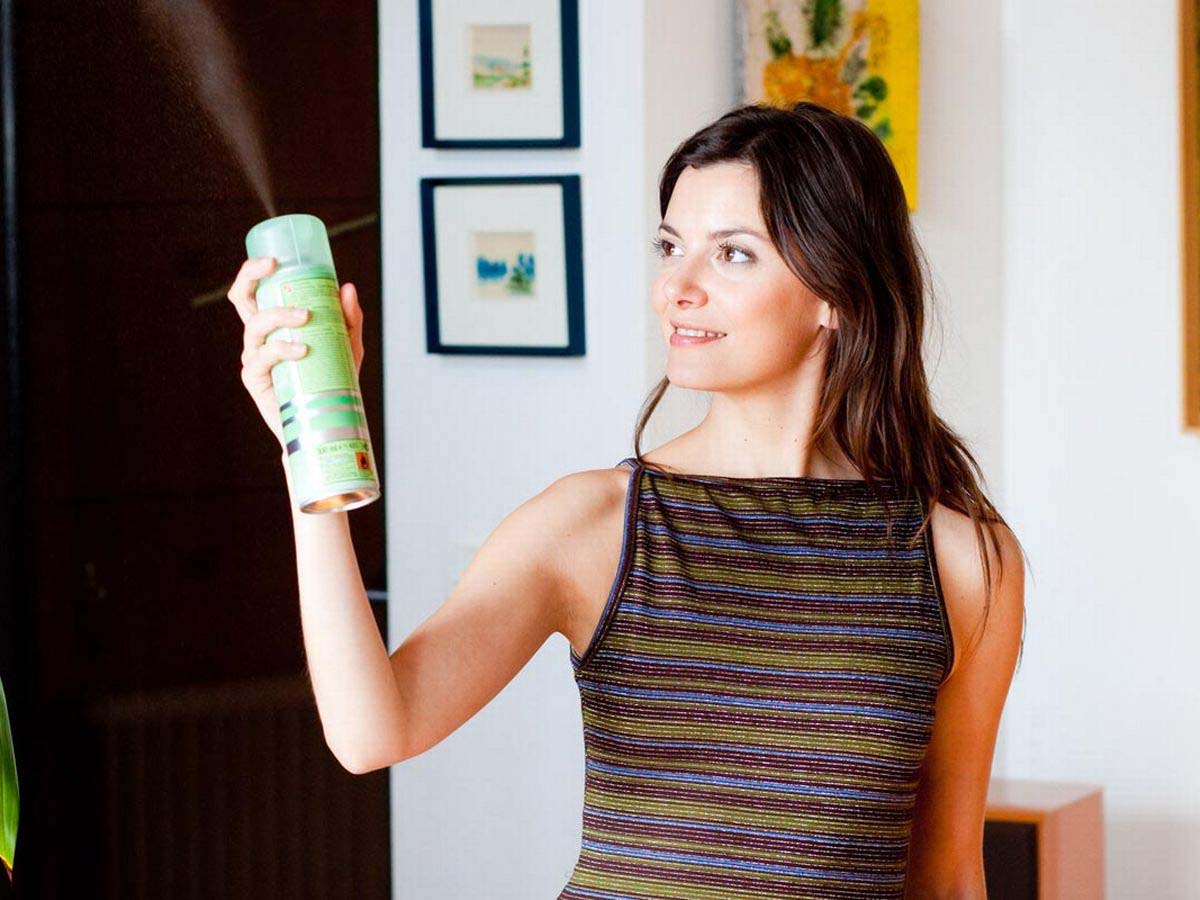 After several years, CARB determined that 25% VOC air fresheners were consumer-acceptable. Over strenuous industry objections, revisions such as the below formula were created:

The higher pressure propellant, containing about 35% propane, provided a somewhat better break-up than A-46, but also required the use of a more costly DOT 2Q (high strength) can to meet U.S. Dept. of Transportation (DOT) requirements.

At least one major marketer decided to include HFC-152a (a non-VOC propellant) to help achieve better break-up. Adding about 6% HFC-152a to a low-pressure hydrocarbon blend produced a near azeotropic mixture just under the DOT’s legal limit of 180psig (130°F). However, replacing some water with HFC-152a added cost to the product, which is often difficult to justify for utility aerosols.

Still unsatisfied, CARB then limited two-phase (water-based) air fresheners to 20% VOCs. This was their third revision. By this time, the aerosol industry had run out of reformulation options for manually-operated, hydrocarbon-propelled air fresheners. Single-phase formulas were marketed, often using DOT 2Q-shaped aluminum cans that were typically filled to above 55–60 volume-% of their capacity. Two percent to 3% carbon dioxide was generally the sole propellant. Had any significant amount of hydrocarbon propellant been added, its partial pressure at 130°F would have significantly reduced the amount of carbon dioxide that could be added, while keeping the total pressure safely below the DOT 2Q limit of 180psig at 130°F. Actually, some studies were made incorporating up to about 5% dimethylether (DME), since its affinity to water would minimize its partial pressure. They were probably not commercialized. 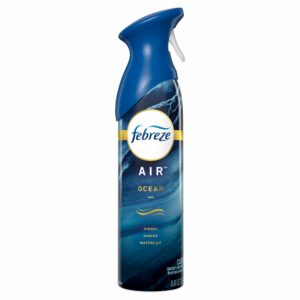 New Febreze Ocean
has notes of ginger, waterlily and hinoki. The 8.8oz. aerosol spray uses an actuator from
Silgan Dispensing

As would be expected, the sprays from these carbon dioxide air fresheners are relatively coarse and particles can be seen falling onto floors and furniture. These formulations may become the new-normal for our air fresheners.

Future aspects
As Doug Raymond has aptly reported (SPRAY, Dec. 2019), CARB has long-range plans for still further reducing the present 20% VOC limit of manual air fresheners. By Jan. 1, 2023 the VOC limit will become 10%, and by Jan. 1, 2031 the limit will be 5%. CARB has decreed that fragrances will now be considered VOCs. There are hopes that a gradual replacement of VOCs by the more sophisticated MIR (Maximum Incremental Reactivity) approach may be helpful. However, CARB has promised the EPA certain reductions of air contaminants in terms of tons per day in its State Implementation Plans (SIPs). These reductions have become the “gold standard,” superseding everything else.

Despite regulatory impediments, the manual aerosol air freshener category is doing well. Consumers have a choice of numerous whimsically-identified fragrances in beautifully decorated, shaped aluminum cans, often presented at eye level on the shelves of major retail stores. We can be confident that these elegant, low-cost products are here to stay. SPRAY