Thanks to economics, regulations, environmental aspects, non-flammability, low cost and other factors, most aerosols are formulated with large amounts of water. Virtually all the water is modified into emulsions. Despite the huge 6.25 million tons per year (2005) U.S. sales market for synthetic detergents alone, our universities pay little or no attention to these unique organic compounds. Consequently, surfactant synthesizers, formulators and scientists in similar disciplines have to develop their knowledge of emulsifiers from other sources: books, journals, supplier literature, co-workers and experimentation. Utilization is often more art than science.

There are many different kinds of surfactants. Table 1 lists a number of categories, albeit with some subjectivity:

Within the non-ionic surfactant category there are a relatively small number of emulsifiers that form w/o emulsions. Their molecules are generally lightly ethylene-oxidated and these -CH2-CH2-O- units confer some water dispersability. For example, lauryl alcohol is insoluble in water, but if two ethylene oxide groups are added to the molecule (called POE2), it becomes soluble with difficulty (Brij 72) and can produce w/o emulsions. If more ethylene oxide groups are added, the surfactant becomes readily water-soluble, forming the much more common o/w emulsions. 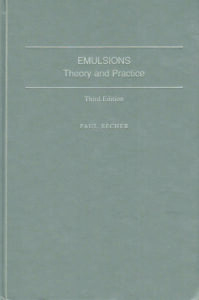 Emulsions: Theory & Practice by Paul Becher was published in 1965.

These interesting w/o emulsions were apparently discovered by C.F. Boe in 1950 (U.S. Patent No. 2,524,590) as an extension of earlier work by W.D. Bancroft (Bancroft’s Rule). It was refined and expanded almost simultaneously by W. Griffen and Paul Becher in 1965. The Becher tabulation of “Hydrophilic-Lipophilic Balance” (HLB) was created in that year. It considered non-ionic emulsifiers, positioning on a span of 0–40. 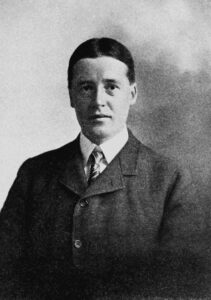 Bancroft’s rule states, “The phase in which an emulsifier is more soluble constitutes the continuous phase.” It was named after Wilder Dwight Bancroft, an American physical chemist, who proposed the rule in the 1910s.

The HLB number for an unknown compound was determined by Becher using a procedure described in various articles and finally in a book titled “The Emulsification Process” (1973). A summary for aerosol scientists was produced by former Dupont scientist Dr. Paul A. Sanders in two textbooks, the first titled “Principles of Aerosol Technology” published by Van Nostrand Reinhold Co. (1970). He described how these non-ionic w/o emulsifiers could be used for water-based pesticides, air fresheners, furniture polishes, artificial snow and other aerosols.

A rough guide to the emulsion properties can be illustrated as:

The type of emulsion can be readily confirmed. A w/o emulsion has oil as the continuous phase. It will not conduct electricity. A droplet of colored water will not disperse (the colorant is added for better visibility).  Add 15% iso-butane and spray. The w/o emulsion does not foam. The spray is relatively warm. Dilution with water forms a separate phase.

Examples of various emulsifiers and their HLB values are shown as follows:

Ideally, the low HLB surfactant (or preferably a blend) should have about the same HLB as the chemical(s) to be emulsified. Typical values are aromatic mineral oil (12.8), kerosenes (10.6), aliphatic solvents (about C12 [9.7]), paraffin wax (9.8) and various oils (11). These values must be determined experimentally. For example, in the development of an aerosol air freshener, the concentrate is placed in a glass tube and the selected hydrocarbon-hydrofluorocarbon propellant is slowly added. At first, emulsification is complete. The mixture turns milky white and no separation of the propellant takes place.

However, when about 15% is added to some formulas, there is a very slow (hours) separation of a clear layer of liquid propellant at the top. Adding still more propellant will accelerate the rate of separation, with a clear meniscus visible in perhaps a few minutes. This is normally considered to be acceptable, provided the separation rate does not increase over several weeks or over anticipatable temperatures, and if the product is directed to be shaken when used.

This brings up a major problem with the HLB systems. As temperatures rise, more hydration of hydrophilic groups takes place. If the heat is sufficient, the desired w/o emulsion may invert to the o/w type. In one unusual case, the unwanted o/w formula was corrected by placing the filled stock in an ice house. Over a weekend, it reverted to the w/o type. The Phase Inversion Temperature or “PIT” refinement of HLB is designed to cope with this problem.

The usual average particle size for aerosol emulsions (including non-ionic w/o types) is about 1.0 to 1.8 microns. This degree of dispersion produces a dull, milky appearance. By homogenization, the micelles can be reduced to the 0.1 to 1.0 micron range, with the color turning blue-white and the product becoming more stable. Upon aging, some flocculation may occur, which is a reversible loose clustering of the dispersed phase. While rare, both flocculation and the more deadly irreversible coagulation have to be considered by aerosol formulators. The use of a homogenizer can make these effects even more unlikely.

Aerosol water-based pesticides and air fresheners were invented about 1960, using HLB technology. While U.S regulators have now decimated this approach, using volatile organic compound (VOC) limits, they were in vogue for almost 50 years, saving marketers millions of dollars. Formulas that utilize hydrocarbon/CFC-152a propellants are still being utilized. With about 25% to 30% propellant, they deliver insecticide and air freshening sprays that are very effective.

The preferred formulas for furniture polishes also use HLB systems to deliver the product in essentially foam-free distributions. Several other household and automotive care aerosols also use this technology. Emulsion science is still developing, with a long way to go.

While many low HLB (w/o) emulsifiers are lightly ethoxylated R-OH organics, such as higher alcohols, glycols, glyceryls, sorbitols and so forth, chemists have other options. The ethylene oxide groups can be replaced with propylene oxide groups for slightly reduced foaming tendencies in the upper w/o HLB 6–8 range.

Other options include using oleamid DEA (diethanolamides, such as Schercomid SO-A), sucrose distearate (such as Crodesta F10 or F50) and various hydroxylated non-ionic surfactants of about HLB >7. In some formulations, blends may be more effective than trying to use a single surfactant. If the HLB numbers are known, the HLB of the blend can be readily calculated as their weighted average. For example, the HLB of a blend of 75% surfactant A (HLB = 4) and 25% surfactant B (HLB = 10) will be 5.5 for surfactants A+B in the above ratio.

Over the years, there has been speculation concerning the possibility of “duplex” HLB emulsions. They would be characterized as w/o/w or o/w/o. They might explain the presence of tiny foam particles in some w/o aerosol sprays. However, Sanders, et.al. did not find any evidence for such structures using microscopic and other experimental techniques.

Since about 1959, when very economical, “water-based,” w/o air fresheners and insecticides were developed (F.D. Haase, Danville, IL), these emulsions have been used worldwide in well over a billion aerosol dispensers to date. Their popularity has been considerably diminished in the U.S., due to the impact of VOC/MIR (maximum incremental reactivity) regulations developed by the California Air Resources Board (CARB) that have had the effect of arbitrarily reducing the percentage of hydrocarbon propellants to the degree where the spray quality has been adversely affected. The industry has reacted by developing “nitrosol” (nitrogen propelled) versions, sometimes boosting the hydrocarbon propellant content with HFC-152a (1,1-difluoroethane) and other means.

These steps have redirected attention to spray characteristics. Ideally, when the dispenser is briefly shaken and pointed upward, there should be essentially no particulate “fall out.” Formulators consider such factors as particle size, possible tiny foam clusters, spray distance to polished wood furniture and (of course) the formulation. The concentration of non-ionic emulsifiers, fragrances, possible odor counteractants and any corrosion inhibitors should be kept as low as possible. As little as about 0.13% low-HLB non-ionic emulsifier can be used successfully. By using containers that are fully lined or laminated, the usual 0.15%–0.20% of sodium benzoate corrosion inhibitor can be eliminated. The essential oil blend (fragrance) must be selected with care to avoid ingredients with strong colors or solvent properties. Those ingredients that meet VOC criteria may warrant minimization if practical.