The extreme irritant effects of certain pepper vein extracts on human skin, eyes, tongues and nasal passages have been known for thousands of years, but only since about 1970 have these debilitating effects been used defensively, thanks to aerosol specialty products. In earlier years, “hot” pepper and paprika concentrates were modified by sweeteners. Cooks and diners then added them very sparingly to soups, sauces, dressings and other food items to give them added zestfulness and a spicy taste. No other commercial uses were contemplated. 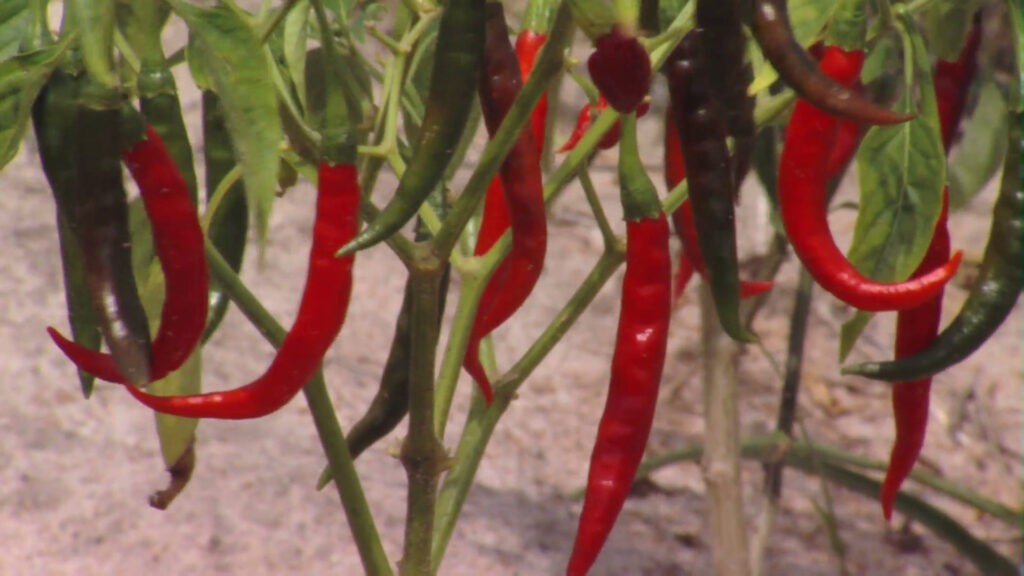 A chili pepper plant ready to harvest in Africa.

The “hot,” pungent effect of most genus capsaicum fruits (such as peppers) is due to the presence of various concentrations of up to about 10 capsaicinoids in the whitish, vertical surface veins and seeds. Depending upon pepper type and maturity, climate, soil and other factors, the capsaicinoids in the venal corridors could total about 0.12% to 1.00% by weight. They can be readily extracted and concentrated to dangerous levels. The most common commodity is known as African Cayenne Red Pepper. Due to a carotenoid co-product, these concentrates are ruby-red in color. When added as drops to food dishes, the highly diluted color is not a problem. However, it can be a problem for a would-be attacker when pepper aerosols are sprayed onto the face. 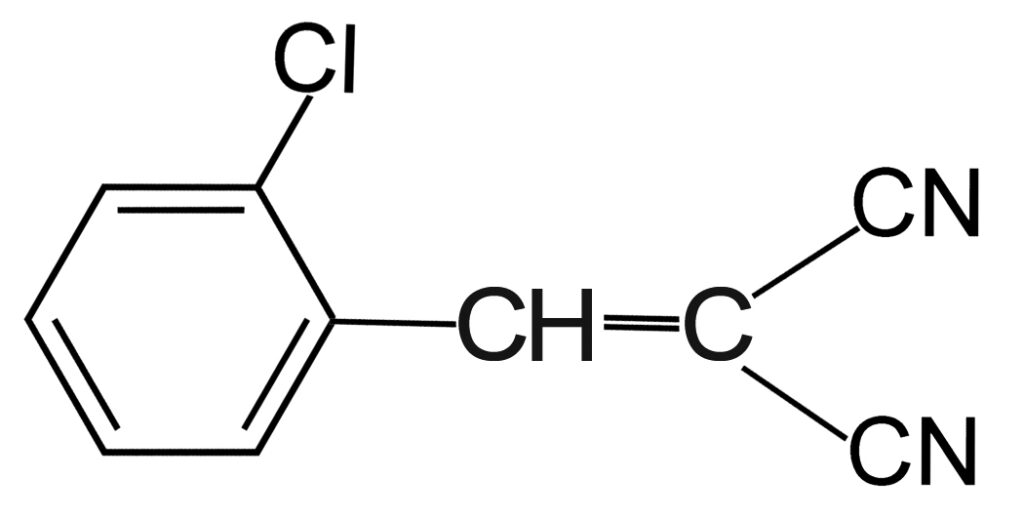 There are many other “hot” chemicals, most of them synthetic. In the UK, there is a strong preference for 2-chlorobenzylidenemalonitrile (CS), derived from the alternative name β,β-dicyano-o-chlorostyrene, dating back to when the compound was first prepared and characterized. The melting point is 96°C (204.8°F). CS sprays are widely used by UK police for riot control. Some CS aerosols are produced in the U.S.; however, natural counter-assault formulations predominate.

Each “hot” chemical has its own personality. For example, CS is more irritating than p-chloroacetophenone but has less incapacitation. The major capsaicinoids in habaneros peppers are intensely concentrated, while the “heat” in several bell peppers is negligible.
Lurid tales about counter-assault aerosols are legion. In one, two chemists waited until an hour after quitting time to conduct a brief target practice with a “Bear Pause” (a pun on “Bear Paws”) aerosol unit. Selecting a large, vacant room in the empty office building, they tested the streaming spray produced by different actuators, using a poster-board target some 20 feet away. A few minutes later, upon leaving the building, they encountered a distraught young lady in the parking lot. She had just experienced some strange inhalation symptoms while trying to catch up on some office work in a downstairs room. She was greatly relieved at the explanation: traces of pepper spray had entered the air circulation system. She felt better in the open air, got into her car and drove off.

Capsaicinoids & their measurements
The “heat-producing” capsaicinoids had not yet been defined or even isolated in 1911 when druggist Wilbur Scoville began to study them. A year later he published his “Scoville Organoleptic Scale,” where an extremely dilute water solution of the “hot” material was given a rating of 1.0 if 50% of professional tasters could detect any difference from a pure water placebo control. It followed that a capsaicinoid solution rated at 1,000 SHU (Scoville Heat Units) could be diluted 1,000-fold before reaching the 1.0 SHU baseline. The two most awesome capsaicins have 16,000,000 SHU ratings when 100% pure. This means that a 1.000 gram Capsaicin (C) sample could be diluted to about 16,100 liters with water, with the “heat” still detectable by 50% of taste experts. 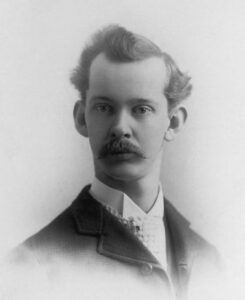 The structure of what is now considered to be the major capsaicin (Capsaicin with a capital “C”) was first defined by Hredzak in 1925. Using Hredzak’s notes, Spaath synthesized it in 1930. The white material melting at 65°C was almost insoluble in water and the pure compound was quite dangerous. When touched to the skin, it quickly produced painful blisters. The vapor pressure was almost negligible, yet sufficient to irritate the skin and eyes after a few minutes of exposure.
Scoville and the other early investigators were unaware that there were at least about 10 capsaicinoids in peppers, ginger, paprika and related fruits. All had very similar alkylaryl molecular structures, differing only in the position of an oxygen atom, a double bond in some, and side-chain length. This is such a common occurrence with natural compounds that it may have been suspected here. Eventually, about 1984, Weaver used liquid chromatography (LC) to separate and identify at least five significant capsaicinoids. The several very minor ones total only about 0.2% to 0.5% and their structures are still a matter of some speculation. In 2000, Dr. M.W. Dong used High Pressure Liquid Chromatography (HPLC) to suggest that the instrumental method was faster, more cost-effective and more accurate than the subjective assay results from panels of expert tasters. 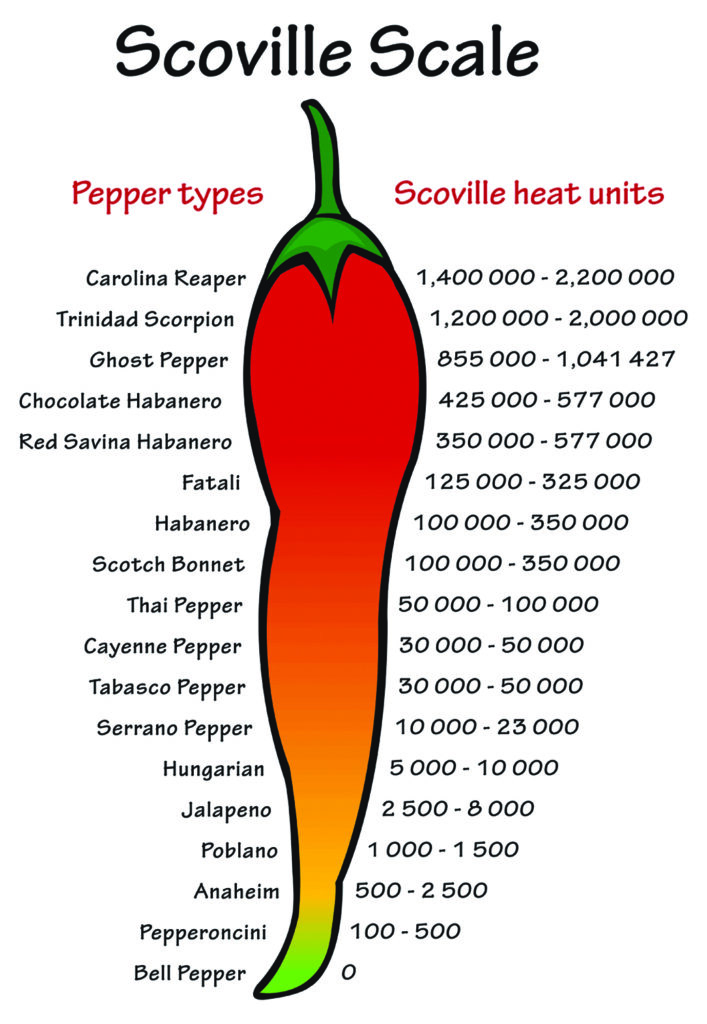 To produce capsaicinoid concentrates for the food industry and (now) the aerosol industry, the pepper “rib” matter is detached and the “hot” ingredients extracted with suitable solvent mixtures (such as 95 volume-% ethanol). Certain other plant ingredients are also extracted in this process, such as coloring matter and triglycerides. After filtration, the ethanol is removed by vacuum distillation. After assaying for the SHU concentration, an appropriate dilution is made, completing the batch. It may be re-assayed, sealed into drums and stored in a cool area. Each supplier has its own proprietary process, which may differ from this description. Final products may be in the area of 1,000,000 to 2,500,000 SHU.

Counter-assault protection
About 1965, some early aerosol entrepreneurs—such as Airosol Co., Inc. in Neodesha, KS, with input from Dr. Lyle D. Goodhue—determined that this newer packaging system could be used for counter-assault protection. The active material contained capsaicinoids from African Red Cayenne Pepper, typically at 5% of the total formulas, using Oil of Capsaicinoid (OC) with a potency of 2,000,000 SHU. Alternatively, 10% of OC (1,000,000 SHU) could be used. To get the most effective and desirable coarse spray, diluents were added. A favorite was diethyleneglycol n-butyl ether. A bit of ethanol was sometimes included to adjust viscosity and particle size. The propellant was almost always CFC-12 (dichlorodifluoromethane), used at about 30–35%. 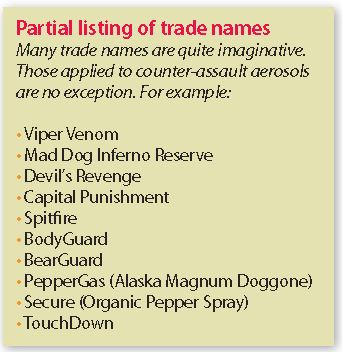 The aerosols were usually in the 75 to 150 gram size, with “wide open” valves that delivered a relatively thin, coarse spray—usually with a small streaming core—at about 3–5 grams per second. The 0.020″ tubular or forward-tapered actuator orifice was instrumental in achieving the desired spray. Some of these early formulas included about 0.005% of a lipophilic red dye, designed to discolor the face of a would-be attacker for a prolonged period of time. The inclusion of about 0.010% Bitrex (denatonium benzoate extreme bittering agent) was considered, but does not appear to have been used commercially. These early products were designed to be used by police officers and carried in small leather pouches on their belts.
When chlorofluorocarbons (CFCs) were banned in 1978, the industry tried about 3.1% CO2, as well as 25–40% of various hydrocarbon propellant blends. The higher pressure mixtures produced a longer “throw.” However, flammability was a problem. Some purchasing groups had the opinion that a human attacker or rioter might be smoking when sprayed, causing serious burns. This was experimentally discounted, but still flammable pepper sprays were often only restricted to animal targets.
When DuPont launched its Dymel 134a about 1995, it was almost immediately adopted for the formulation of non-flammable counter-assault aerosol products. A proliferation of sizes followed. One of the smallest aerosols was produced by the Spitfire Co. and aptly named “Spitfire.” Its unique 9mm diameter aluminum can held five grams of non-flammable pepper spray. It was designed with a cap having a top metal loop to fit on a key-ring. The sales unit contained an OC-free placebo and a booklet with instructions on how to practice by spraying targets; it was marketed chiefly toward women. 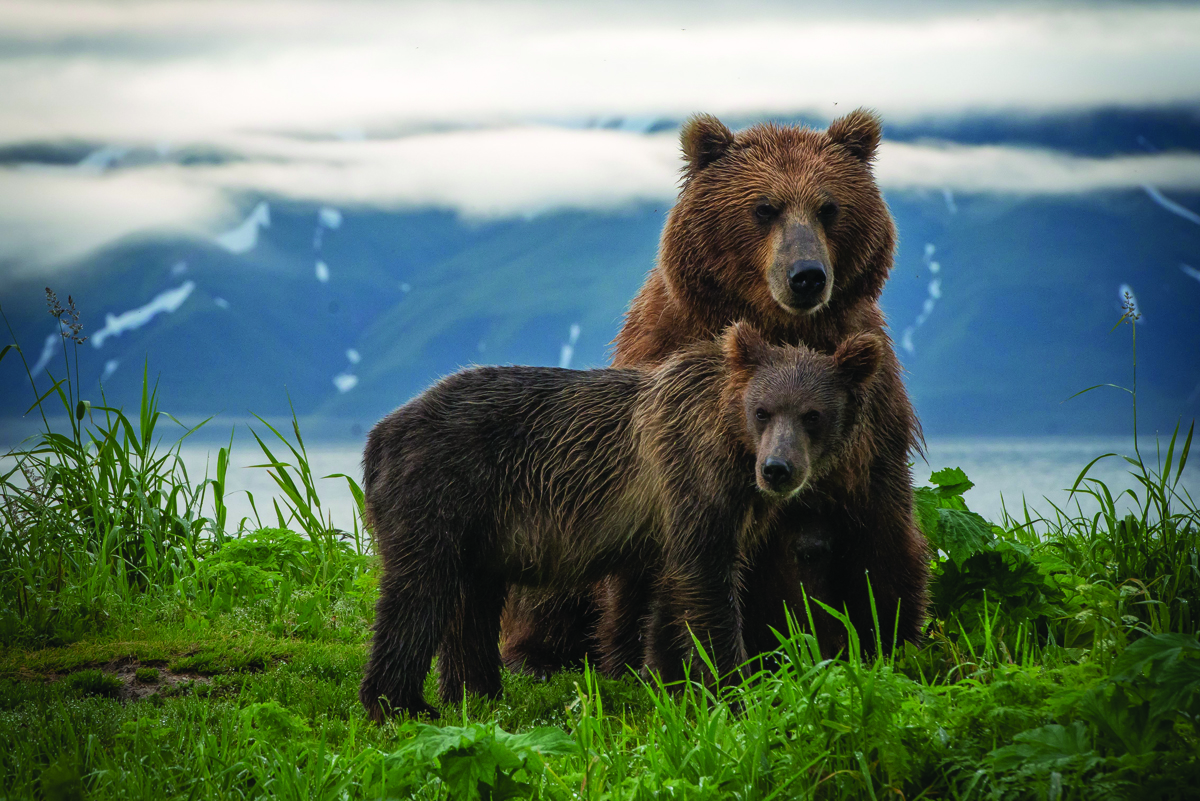 At the opposite end of the pepper spray spectrum are the bear repellants. Extra-strong formulas are typically packed in aluminum cans with fill weights of at least 400 grams. Exceedingly high delivery rate valves are used to emit streaming sprays that can travel up to about 30 feet at a charging bear. Considering how fast irate bears can run, and that about 0.4 second is needed to develop the massive irritation effect, it can be determined that some bears may momentarily contact the terrified person before becoming painfully distracted.

Firms contemplating the marketing of pepper sprays should be aware of any national, state or local regulations impacting these aerosols. If the label mentions human targets, the product would be administered by the U.S. Food & Drug Administration (FDA). Otherwise, the U.S. Consumer Product Safety Commission (CPSC) may be in control. Experts at major contract fillers of these products—such as Mace Brand or Guardian Protective Devices—can be contacted.

2-Chlorobenzylidenemalononitrile (CS)
This highly irritating synthetic chemical is used to some extent in U.S. counter-assault aerosols, but is far more popular in the UK, Australia and several other countries. Product and packaging requirements have been developed by several nations. Those enacted by the UK Home Office Police Scientific Development Branch in coordination with the European Aerosol Federation (FEA) are among the best. The parameters are summarized as follows:

• Purity of the CS compound: 99% minimum
• CS shall be the only irritant in the aerosol formula
• CS content shall not exceed 5.0 grams per container
• The device must not contain more than 92mL of solution
• The device must be able to discharge the product consistently for at least six seconds
• The spray pattern must be mainly within a 150mm circle at 2.0 meters.
• The delivery rate shall be between 3.5 and 5.0 grams per second

Other requirements include flammability limits (FEA method), drop tests, hot water bath test and the need to select solvents (such as methyl isobutyl ketone, MIBK) and propellants (such as HFC-134a) from approved lists. Also, the container shape must fit comfortably in the hands of police personnel.
The CS products for non-police use are free to have alternative specifications, but they generally use the above criteria. CS products have advantages over the pepper sprays in terms of uniformity, total lack of coloration and the absence of extraneous (natural) ingredients. On the other hand, natural products appear to have a special appeal and safety aspect for many prospective customers.

Although often stocked in outdoorsman shops and flea market stalls, pepper sprays can sometimes be hard to find. Consequently, merchants are now advertising these aerosols on the Internet and in sporting magazines, often replete with details concerning the spray characteristics, SHU number and other statistics. SPRAY