UK aerosol fillings increased by 9% in 2011 compared with the previous year, latest figures show. Nearly 1.4 billion aerosols were filled in 2011, compared with just under 1.3 billion during 2010, according to the latest annual figures from the British Aerosol Manufacturers’ Association (BAMA). 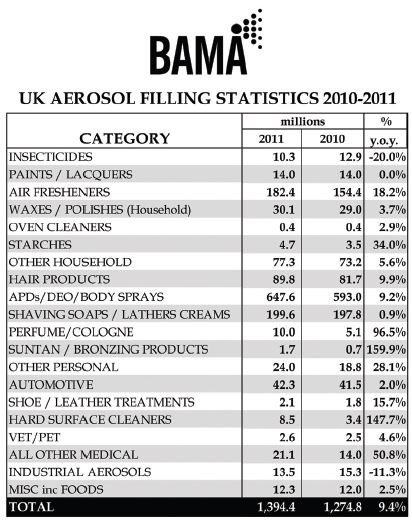 Antiperspirants, deodorants and body sprays rose from 593 million units to 647.6 million aerosols filled, an increase of 9%. Hairsprays and hair mousses rose from 81.7 million to 89.8 million, a rise of 10% over 2010. Fashion trends, such as the increasing demand for dry shampoos, has influenced overall demand. Other personal care products of note were sun tan and bronzing aerosols ,which, while a relatively small category, saw 160% growth.

“Other” personal products rose by a healthy 28% from 18.8 million to 24 million units. Shaving products continued to make an important contribution, but remained stable with a modest increase to 199.6 million units filled in 2011—up just 1% from the previous year.

The air freshener category, already a strong sector, was especially buoyant with 18% growth from 154 million in 2010 to 182.4 million in 2011. Cleaning products also enjoyed rapid growth during 2011. Bathroom and kitchen, again a small category, rose by 148% reflecting importation of filling from overseas fillers, while oven cleaners rose 3% and “other household” such as glass and carpet cleaners and DIY products by 6%. Also in the household category, waxes and polishes showed a 4% growth, from 29 million units to 30.1 million aerosols. 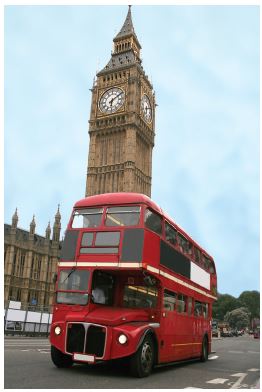 Dr. John Morris, Chief Executive of BAMA, stated, “These latest figures are particularly pleasing and it is splendid that BAMA can report such strong growth in its 50th anniversary year (2011). The sector shows not just resilience but firm growth. To have achieved such growth when the financial climate and consumer spending make for tough trading is testament to the strength of the aerosol format.

“The figures indicate that many strong sectors, including air fresheners and personal care products in particular, continue to grow, despite starting from a high base. Innovation also seems to be paying dividends with newer sectors such as sun tan sprays, bronzers and perfumes growing extremely well to meet consumer demand”.

According to BAMA, the results are particularly gratifying for the aerosol industry, which, like many other sectors, has been operating against a background of challenging trading conditions.

“We can be especially confident in these figures as they account for virtually all manufacturers and fillers in the UK,” concluded Morris. “BAMA continues to actively promote the recycling of used, empty aerosols, with the success of our long-term recycling campaign helping to persuade over 83% of local authorities to undertake recycling of empty aerosols at the curbside.”