Hello everyone. Water is often referred to as being the closest thing to a universal solvent. It dissolves a wide range of formula ingredients and dissolves into a wide range of formula chemicals. For example, inorganic salts and organic salts, such as sodium chloride or sodium benzoate, dissolve in water. Most gases dissolve in water and some gases—such as carbon dioxide—react with water to form corrosive ions and molecules. Dimethyl ether (DME) propellant is slightly water soluble and small amounts of water will dissolve in HFC152a propellant; liquified petroleum gas (LPG) propellants and most organic solvents could also contain small amounts of water. 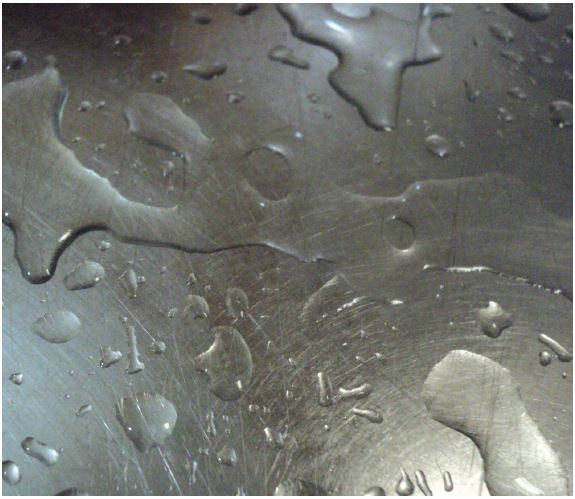 Most gases dissolve in water and some gases—such as carbon dioxide—
react with water to form corrosive ions and molecules. Dimethyl
ether (DME) propellant is slightly water soluble and small
amounts of water will dissolve in HFC152a propellant; liquified
petroleum gas (LPG) propellants and most organic solvents could
also contain small amounts of water.

Water-insoluble organic chemicals can be mixed with water and surfactants to form emulsions. Emulsions can be either water- in-oil (oil-out or w/o emulsions) or oil-in-water (water-out or o/w emulsions).

Corrosion Basics: Water chemistry & properties relevant to spray packaging
Water molecules are composed of one oxygen and two hydrogen atoms. The valence electrons in water molecules are not equally shared between the hydrogen and oxygen atoms. Thus, one area of the water molecule is positively charged and the other area is negatively charged. This charge-polarization of water molecules causes them to migrate to and adsorb on metal and polymer surfaces. Water’s small size also allows it to absorb into and migrate through the internal coatings in aerosol containers and the laminate films on metal foils. The polarized water molecules swell the polymer as water absorbs into and diffuses through a polymer, thereby creating microscopic rivers through the polymer.

Corrosion Basics: Water & spray package corrosion
Water could be in your formula either as an ingredient or as a contaminant. Water disassociates into hydrogen ions and hydroxyl ions and the hydrogen ions are electrochemically active. In other words, water is potentially also a corrosive ingredient in your formula.
Water plays many different roles in spray package material corrosion. For example, water molecules:

• Could be a corrosive formula ingredient
• Transport corrosive formula ingredients to the package metal
• Move ionic charges to and from corroded areas to balance  the electrical charge at both the corrosion site and the area surrounding the corrosion site
• Hydrate metal ions formed by corrosion, thereby producing more electrochemically active hydrogen ions
• Provide hydroxyl ions that react with metal ions to form visible corrosion (i.e., the rust observed on steel aerosol containers or the black corrosion on aluminum)
• Migrate through package polymer coatings and laminate films to the package metal to cause metal corrosion and/or the coating or the laminate film to separate from the package metal (delaminate)
• Transform container coatings into semi-permeable membranes that only allow specific formula ingredients to migrate through the coating to the container metal
• Form microscopic rivers flowing through container coatings or laminate films that could subsequently cause coating delamination and/or metal corrosion—your formula might not be corrosive but the microscopic rivers could have a different chemical composition from your formula and also be corrosive
• Are a solvent for the various corrosion inhibitors used to prevent and control spray package corrosion
• Could transform non-corrosive anhydrous formulas into package-eaters

Water could simultaneously be involved in several of the items in the above list. For example, corrosion of uncoated tinplated steel involves water as follows:

• Water reacts with aluminum oxide in the container steel to form an aluminum hydroxide gel layer on top of the container surface (aluminum is used in the steel-making process)
• Water plus the aluminum hydroxide gel forms a semipermeable membrane that allows only water and specific ions to pass into/out of and through the gel
• Iron corrosion initiates in an effort to make the chemical composition of the liquid under the gel layer the same composition as the liquid above and surrounding the gel
• Electrons generated by corrosion under the gel move through the metal and reduce water above and around the gel layer to form hydroxyl ions
• The electrons from corrosion also reduce electrochemically active ions and molecules in your formula
• Water hydrates iron ions and buffers the pH under the gel to approximately four
• A portion of the iron ions under the gel diffuse through it into your formula
• Water transports hydroxyl ions from the edge of the gel layer to the iron ions diffusing through the gel, forming the red/brown rust seen on steel containers
• Osmotic pressure pulls negative ions, such as chloride ions, and water into and through the gel

One can see from this example that water is simultaneously performing multiple roles of:

Water needs to be in the liquid state to perform its various corrosion-roles and, in several instances, water is consumed in a given step.

In addition, measurements of water layer thickness in vapor areas indicate that corrosion occurs under an approximately 30-water-molecule layer. In other words, not a lot of water is needed for spray package corrosion.

Please visit www.pairodocspro.com for more information. Thanks for reading and I’ll see you in October. SPRAY