Home > September 2019 > What does global warming potential mean for the aerosol industry?

What does global warming potential mean for the aerosol industry?

There is little doubt among scientists about the impact of human activity on the Earth’s climate 1. The levels of greenhouse gases (GHGs) in our atmosphere are higher now than in the last 650,000 years (or longer 2). Carbon dioxide, methane and nitrous oxide are all naturally occurring GHGs, all of which are at their highest levels since the Industrial Revolution 3. Because of the GHGs resulting from human activity, the Intergovernmental Panel on Climate Change (IPCC) estimates that the global average surface temperature has increased 0.85°C between 1880 and 2012 4.

Global Warming Potential (GWP) was developed to compare the global warming impact of different gases. GWP is a measure of how much energy the emissions of one ton of a chemical will absorb over a period of time, relative to one ton of carbon dioxide 5. Thus, the higher the GWP number, the more the chemical will warm the Earth compared to carbon dioxide.

So why does this matter to the aerosol industry? 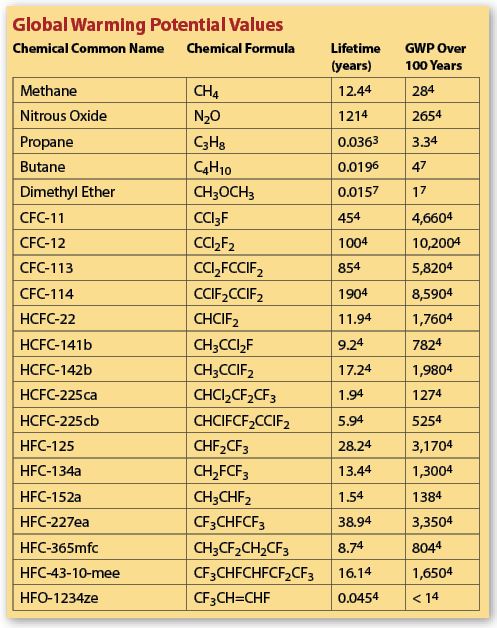 In the 1990s, aerosol companies began to use hydrofluorocarbons (HFCs) as one of the replacement propellant options for ozone-depleting substances. HFCs are a great tool for formulators because they are liquified propellants, but do not count toward volatile organic compound (VOC) limits for consumer products. While HFCs were one of several very effective propellant options in addressing ozone-depletion for aerosol products, unfortunately, many also have high GWP values.
The Montreal Protocol, an international treaty designed to phase out ozone-depleting chemicals 8, is hailed as one of the best examples of international cooperation. The Montreal Protocol has had widespread adoption and the hole in the ozone is slowly healing.

In 2016, the last revision to the Montreal Protocol, known as the Kigali Amendment, led countries around world to agree to phase down the production and use of HFCs. Moving toward lower GWP propellant options has now become a necessity. While the U.S. has not ratified the Kigali Amendment, 75 countries 9 have done so to date and it is up to each how they choose to phase down their use of HFCs.
In the U.S., the Environmental Protection Agency (EPA) was working on restricting the use of certain HFCs before the Kigali Amendment was finalized; however, those attempts were struck down in the courts 10. You can read more about the D.C. Circuit Court’s rulings on the EPA Significant New Alternatives Policy (SNAP) Rules 20 and 21 in the National Law Review.

The major effect of these rules on aerosols would have been to restrict the use of HFC-134a except for limited critical uses, such as propellants in metered dose inhalers, cleaning products for removal of grease, flux and other soils from electrical equipment or electronics, or pesticides for use near electrical wires or in aircraft. HFC-134a has similar restrictions and exemptions in Canada for use as an aerosol propellant; however, a few key uses, such as duster sprays for energized electrical equipment, are not allowed in Canada unless the manufacturer obtains a permit. In addition to product-specific restrictions, Canada also has a phase down of all HFCs, including HFC-152a. The use of HFCs with a GWP greater than 150 became prohibited on Jan. 1, 2019, with the exemption of several critical uses.

Several other states looking to similarly regulate HFCs in the future:
• Delaware passed a resolution directing the Dept. of Natural Resources & Environmental Control to propose regulations by March 2020.
• New York is expected to release a proposal later this year, though the rulemaking won’t conclude until 2020. HCPA has filed pre-proposal comments.
• Connecticut and Maryland have announced that they will develop regulations to phase out the use of HFCs this year.
• The Household & Commercial Products Association (HCPA) is monitoring these and other states that are expected to announce or release HFC regulations in the next year.

The HCPA supports efforts at the state level that remain consistent with existing state regulations of HFCs, and will continue to work with the EPA on a federal solution. If you are interested in State or federal activity regarding the use of HFCs in aerosol products, I encourage you to attend our next in-person meeting at HCPA’s Annual Meeting, XPAND2019, in Fort Lauderdale, FL on December 8–11. Don’t worry if you’re not a member; contact me at [email protected] to discuss involvement. SPRAY

8 U.S. Department of State. (2019, February 11). The Montreal Protocol on Substances that Deplete the Ozone Layer. Retrieved from here