Why do spray package metals and coated metals corrode?

Hello, everyone. Three ingredients are needed for metal or coated metal corrosion:

The structure of a metal contributes to its susceptibility toward corrosion. Figure 1 is a 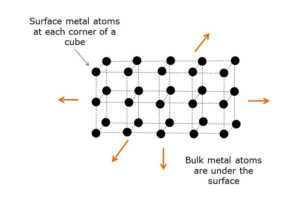 simple cubic model for solids. Metal atoms are on the corner of each cube and the cubes are repeated under the surface atoms in all directions as indicated by the orange arrows.
Iron has an additional atom inside each cube and aluminum has additional atoms on each cube face. The metals used for spray packaging are alloys, and the alloying elements are located either in one of the metal atom positions or wedged between the iron and aluminum atoms. We will use the simpler model in Figure 1 for the discussion on why metals corrode.

Figure 2 depicts a more complex cross section of the model in Figure 1. 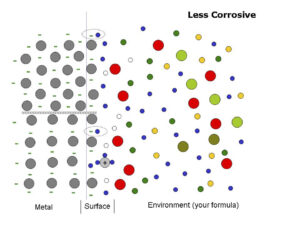 Figure 2: Cross section of a metal with slight corrosion

Green negative signs represent metal valence electrons
Other colored circles represent various ions and molecules that are formula ingredients
Notice in Figure 2 that the axis for atoms in the top group is 45 degrees to the axis for the bottom group under the parallel wavy lines. The two different groups represent different crystal plane orientations and the wavy lines represent grain boundaries between the two different crystal planes. Some crystal planes are more susceptible to corrosion than others and in certain instances grain boundaries contribute to or cause localized corrosion.
There are two oval lines in Figure 2 around a water molecule and an electron—one above the top group and another under the first row of atoms below the grain boundary. The encircled water molecule-electron pairs illustrate water molecules removing electrons from surface atoms.

Other molecules, such as oxygen, are also electrochemically active and able to cause metal or coated metal corrosion. Surfactants often enhance corrosion by making the metal surface more available to water molecules and other electrochemically-active formula ingredients. Surfactants could also promote the diffusion of water and other formula ingredients through coatings.

Internal coatings are not perfect barriers between the package metal and your formula. However, a defect in the coating or a hole in a coating is not necessary for metal corrosion to occur under the coating, because water molecules and formula ingredients diffuse through coatings to the underlying metal surface. Whether or not corrosion occurs in this situation is determined by the chemical composition of the liquid diffusing through the coating.

Interestingly, some molecules are weakly electrochemically active and prevent corrosion by attaching themselves to metal surfaces—referred to as adsorption. The molecules share the metal’s valence electrons instead of removing them with this type of situation. Thus, adsorption could control or prevent corrosion by blocking electron removal by other electrochemically active ingredients in your formula. Corrosion inhibition by absorption is only one of several corrosion inhibitor mechanisms.

We would be happy to teach our Elements of Spray Package (Aerosol Container) Corrosion short course at your R&D facility.