Written on: December 1, 2021 by Nicholas Georges

On Sept. 23, 2021, Michael Reagan, Administrator of the U.S. Environmental Protection Agency (EPA), signed the Phasedown of Hydrofluorocarbons: Establishing the Allowance Allocation & Trading Program Under the American Innovation & Manufacturing Acti final rule, which established a program to cap and phase down the production and consumption of hydrofluorocarbons (HFCs) for 2022 and 2023, as well as set the baseline levels from which reductions will be made. The EPA uses an allowance as the unit of measure that controls the production and consumption of HFCs.

Following Administrator Reagan’s announcement, the EPA issued Phasedown of Hydrofluorocarbons: Notice of 2022 Allowance Allocations for Production & Consumption of Regulated Substances Under the American Innovation & Manufacturing Act of 2020ii, which set the production and consumption HFC allowances for 2022 at 90% of the baseline established in the final rule.

As directed by Congressiii, the EPA must phase down the consumption and production of HFCs by 85% below baseline levels by 2036. The EPA set these baselines at 385.55 million metric tons of exchange value equivalent (MMTEVe)iv for production and 303.89 MMTEVe for consumption. The American Innovation & Manufacturing (AIM) Act specifically lists 18 HFCs that must be addressed (see Table 1). While the majority of the phasedowns are directed at refrigerants and air conditioning, the list also includes HFC-134a and HFC-152a, both of which are of interest to the aerosol propellant industry. This directive goes further than current State regulations for HFCs, which were based on the EPA’s rescinded Significant New Alternatives Policy (SNAP) Program Rules 20 and 21, and focused on restricting the use of high global warming potential (GWP) HFCs (those greater than 150v). 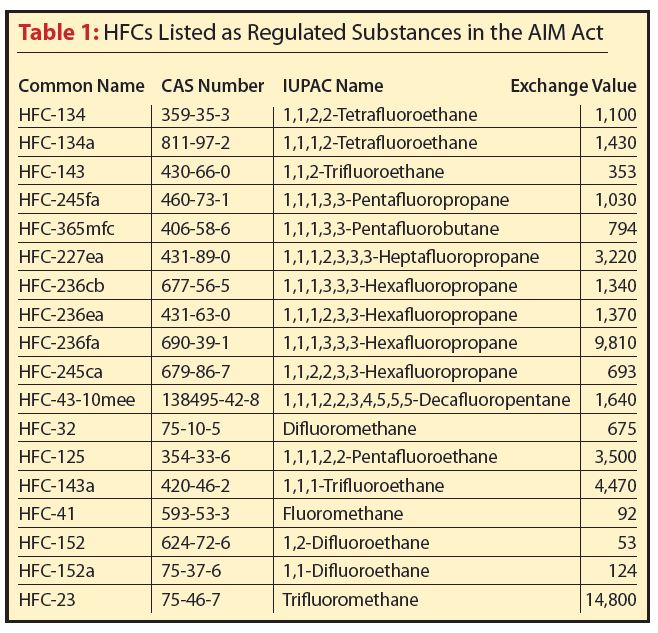 While the EPA needs to reduce the production and consumption of HFCs by 85% below baseline levels by 2036, that won’t happen instantaneously, which is why we use the term “phasedown.” Chart 1vi shows the schedule for when reductions are expected to occur compared to baseline levels. 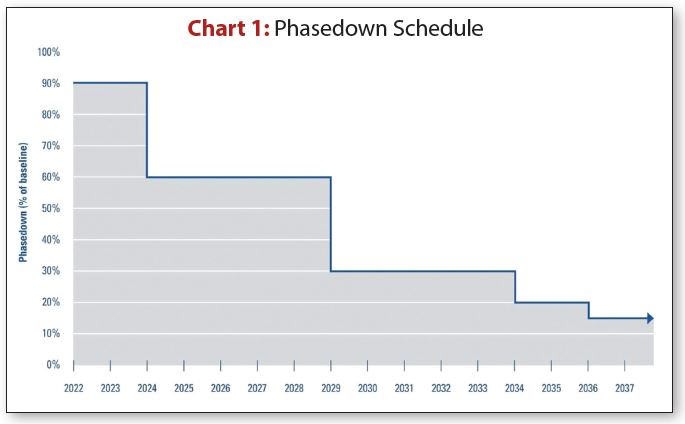 Readers who are not familiar with the AIM Act may be wondering what the “Exchange Value” column represents. Rather than treat all HFCs as the same and phase down their total mass, the EPA is phasing down their emissions of equivalent metric tons of carbon dioxide (CO2). The “Exchange Value” is equivalent to the 100-year GWP of the chemical as found in the AR4v, which is effectively the tonnage multiplied by the exchange value. In short, the production and consumption of higher GWP HFCs will require more allocation than HFCs with a lower GWP.

There are a few important things to be aware of when looking at how the EPA gave out HFCs allocations for 2022. Congress directed the EPA to give mandatory allocations to six applications: metered dose inhalers; defense sprays; structural composite performed polyurethane foam for marine use and trailer use; etching of semiconductor material or wafers and the cleaning of chemical vapor deposition chambers within the semiconductor manufacturing sector; mission-critical military end-uses; and on-board aerospace fire suppression.

However, there are concerns from both industry and the non-governmental organization (NGO) community regarding how the EPA is allocating allowances related to imports since allowances are required only for bulk HFCs and not products containing HFCs. Not including the import of these products could potentially undermine the environmental benefits that the AIM Act is expected to provide.

The Household & Commercial Products Association (HCPA) and National Aerosol Association (NAA) are working together to provide the EPA with information that will assist it in its next allocation rulemaking. The EPA needs to conduct a subsequent rulemaking to govern the allocations for 2024 and beyond; 2024 is a critical year because it’s when the cap on the production and consumption of HFCs will drop from 90% of the baseline to 60%. That significant drop will surely be felt by domestic manufacturers, and for the benefits of the AIM Act to be fully realized, imported materials and finished products that contain HFCs must be included in the phasedown.

This article provides a high-level overview of the AIM Act and its impacts, but if you have specific questions or would like to get involved with our activity related to HFCs, please contact me at [email protected]. SPRAY