The UK has completed its first year outside the European Union (EU) and its Government appears intent in pursuing its sovereignty as far as regulation is concerned. Although the official “transition period” has ended, things are far from settled for manufacturers and marketers, with new policies being drafted and existing ones amended.

GB CLP
With its exit from the EU finalized, the UK proceeded to create a Great Britain (GB) version of CLP (Classification, Labeling & Packaging of Chemicals). GB CLP is based on the UN Globally Harmonized System, as it was implemented by EU CLP on Jan. 1, 2021,  but the UK has indicated that, in the future, it will reflect more changes to the GHS than to the EU CLP. The Mandatory Classification List (MCL) is now up and running, and companies placing aerosols on the GB market that are covered by CLP must use its classifications. 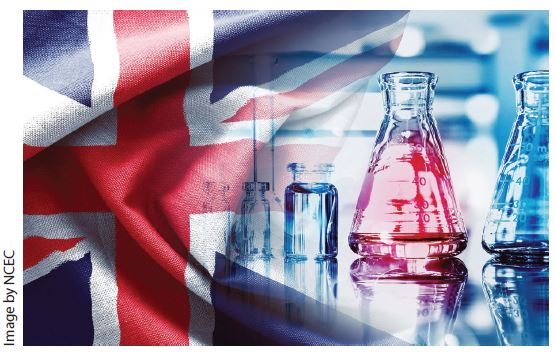 The UK Health & Safety Executive (HSE) will update the MCL as data on hazard classifications becomes available, but said that while parallel discussions in the EU will be taken into account, it will not guarantee the adoption of the same classifications as the EU if the evidence doesn’t support them.

Last year, the European Commission brokered an agreement of the National CLP Competent Authorities (CARACAL) to exclude propellant when using a calculation method to classify aerosols for health and environmental effect. BAMA asked the HSE if this interpretation will also apply to GB CLP. The response received contains a degree of ambiguity and states, “EU guidance on the classification of propellants has no automatic applicability on UK/GB suppliers.” However, it was then added that if challenged by an enforcing authority, duty holders must ensure they can justify the decisions they made. It is understood that HSE plans to produce its regulatory guidance for GB CLP, but this is likely to take some time.

UK REACH
UK Registration, Evaluation, Authorization & Restriction of Chemicals (REACH) was created to regulate chemicals following the UK’s exit from the EU. The key principles, aims and processes of EU REACH (i.e., registration, evaluation, authorization and restriction) have been retained in UK REACH, but the two systems now operate independently from each other. UK REACH applies to chemicals manufactured, imported into and used in Great Britain, but as long as the Northern Ireland Protocol lasts, chemicals in Northern Ireland will continue to be regulated by EU REACH. UK REACH is administered by the HSE and applies to substances manufactured or imported into GB in quantities greater than one tonne per year and works in the same way as the EU version, but has four duty holders:

Downstream Users have the obligation to use only UK REACH-registered substances in GB. Manufacturers and importers into GB must register substances they supply in quantities greater than one tonne per year. GB-based manufacturers or importers who held EU REACH registrations had a grace period to copy across their registrations from EU REACH to UK REACH. This is known as “grandfathering” and a database of over 4,000 substances has recently been published by the Dept. for Environment, Food & Rural Affairs. The advantage of following that route is that companies holding the registration have up to six years (depending on the tonnage) to provide HSE with full registration information.

Importers of finished aerosols manufactured in the EU, or companies importing EU REACH registered chemicals to fill into aerosols in GB, now fall within Group Three— Importers under UK REACH who, before EU Exit, were Downstream Users. These companies had until Oct. 27, 2021 to complete a Downstream User Import Notification, which then allowed them the same time extensions as for the previous two categories.

Chemicals that are neither in the grandfather list nor subject to the above Notification must be fully registered. On the positive side, the UK has developed an IT system to further help companies using chemicals to comply with REACH chemical regulations and to support the submission of dossiers and information to the HSE. SPRAY