Written on: January 1, 2023 by Nicholas Georges

We’re past the point of chestnuts roasting on an open fire, and while Jack Frost still nips at our noses, we’re in full swing of the New Year. As we spend more time indoors during the Winter months, we’re more cognizant of indoor air quality.

Research from the House Observations of Microbial & Environmental Chemistry (HOMEChem) has shown that holiday dinners have a greater impact on indoor air quality than consumer products. However, it’s fair to wonder how the products we use every day, such as cleaners and disinfectants, also impact indoor air quality. 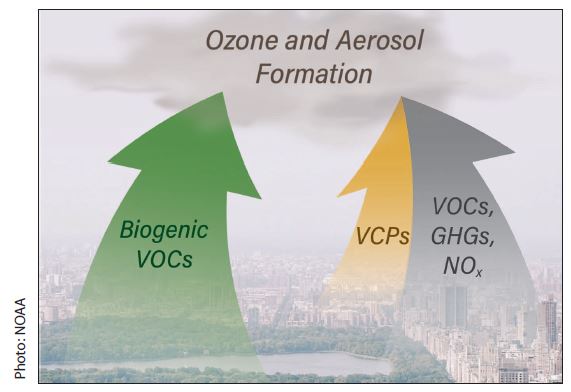 Recent research suggests that the amount of ground-level ozone that may be formed by consumer products varies by region due to factors other than population. Research from models found in The Impact of Volatile Chemical Products, Other VOCs & NOx on Peak Ozone in the Lake Michigan Regioni showed that consumer products were responsible for approximately 2.7 parts per billion (ppb) of ozone over Lake Michigan. The modeling also showed that, except for a small zone downwind of Chicago, reductions in NOx emissions have more influence on ozone than reductions in volatile organic compound (VOC) emissions.

This differs from research in Los Angelesii and New Yorkiii, which showed that consumer products were responsible for 9ppb of ozone and five to 12ppb of ozone, respectively. While we can speculate that population density plays a role in determining the impact that consumer product emissions have on ground-level ozone, other factors, such as the amount of biogenic VOC—which are the VOCs synthesized and released from plants—also contribute to air quality.

For more than 35 years, Industry has been working with the California Air Resources Board (CARB) to reduce VOC content in consumer and commercial products. CARB estimatesiv that, as a result of these regulations, VOC emissions have decreased by 50% compared to 1990 levels.

While California’s VOC regulations are the most stringent in the country, CARB’s regulations have been used as the foundation for the national regulation set by the U.S. Environmental Protection Agency (EPA), as well as in several other States and Canada. CARB’s regulation may also serve as the basis for future rulemakings in other countries, as well.

Despite only recently completing its previous rulemaking, CARB has already started preparing for its next rulemaking. The 2022 State Implementation Plan (SIP) Strategy for California proposes to reduce VOC emissions by another 20 tons per day to account for expected population increases in the State. This represents twice the amount of reductions from the last rulemaking, which were very challenging to achieve and have not yet been fully implemented.

Achieving the additional future reductions may require alternative approaches to decrease the amount of ground-level ozone from consumer products. This could include a broader use of photochemical reactivity rather than the current mass-based VOC approach—or could even include revisiting the foundational approaches of CARB.

The Household & Commercial Products Association (HCPA) has been an active participant in Statev VOC rulemakings and had discussions with several other States about new or revised VOC regulations.

The Yuletide carols may have come to an end, but upcoming activity related to VOC content in consumer products is just getting started. I encourage you to stay up-to-date on these developments and get involved by reaching out to me at [email protected]

From all of us at HCPA, we wish you a healthy and happy 2023. SPRAY