In November, New Jersey Governor Chris Christie signed bill S1909, which will remove approximately two dozen antiquated and anachronistic statutes from the state’s books. The bill addresses laws that have been “superseded or invalidated, or which are anachronistic in nature — i.e. belonging to an earlier time and irrelevant in the current legal, political, and social climate.”

It made sense to repeal some of the laws, which included permitting stallions, bulls and rams to run at large; forbidding occupations to persons infected with venereal diseases; killing an unmuzzled dog running at large; and feeding county prisoners.
However, a few of them didn’t really make sense to me; why is it no longer a crime to delay or detain homing pigeons or steal personal property from shipwreck victims? Anachronistic, maybe, but I think still valid in this heavily populated, pet-loving state with its often treacherous shoreline. 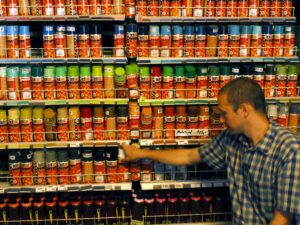 Needless to say, the soon-to-be-trashed “outdated” law that really made us sit up and take notice was the one that made it illegal to “sell spray paint without posting a sign warning juveniles of the penalty for graffiti.” We here at SPRAY were scratching our heads as to why that law was considered obsolete. It seems a perfectly sound law, not archaic at all. We were stumped and Gov. Christie attached no comment to a press release announcing he signed the bill, according to Matthew Friedman of The Star-Ledger.

The recommendations to strike the laws were made by the New Jersey Law Revision Commission. We reached out to them for comment, but as we went to press, had no reply.
SPRAY also reached out to Heidi McAuliffe, Executive Director of the Graffiti Resource Council (GRC), who confirmed that the requirement to post signs in retail stores that inform aerosol coatings customers that graffiti vandalism is illegal is fairly common in many jurisdictions. It is included in the Model Anti-Graffiti Regulation that was adopted by the International Municipal Lawyer’s Association some years ago and consequently, it has been incorporated into innumerable city and municipal ordinances all over the country. It is also included in the state laws of California and Rhode Island.

The GRC includes a provision for signs in retail stores in its guidance on how to develop an anti-graffiti regulation. Its advice is based upon the IMLA Model Law as it is one element of a successful comprehensive anti-graffiti regulation, McAuliffe told us. This type of signage helps make customers aware of the law and reminds citizens of the negative impacts of graffiti vandalism.

So why was the law stricken from the book in New Jersey? We just don’t know, but are trying hard to find out. Stay tuned to SPRAY for an update to this perplexing development.