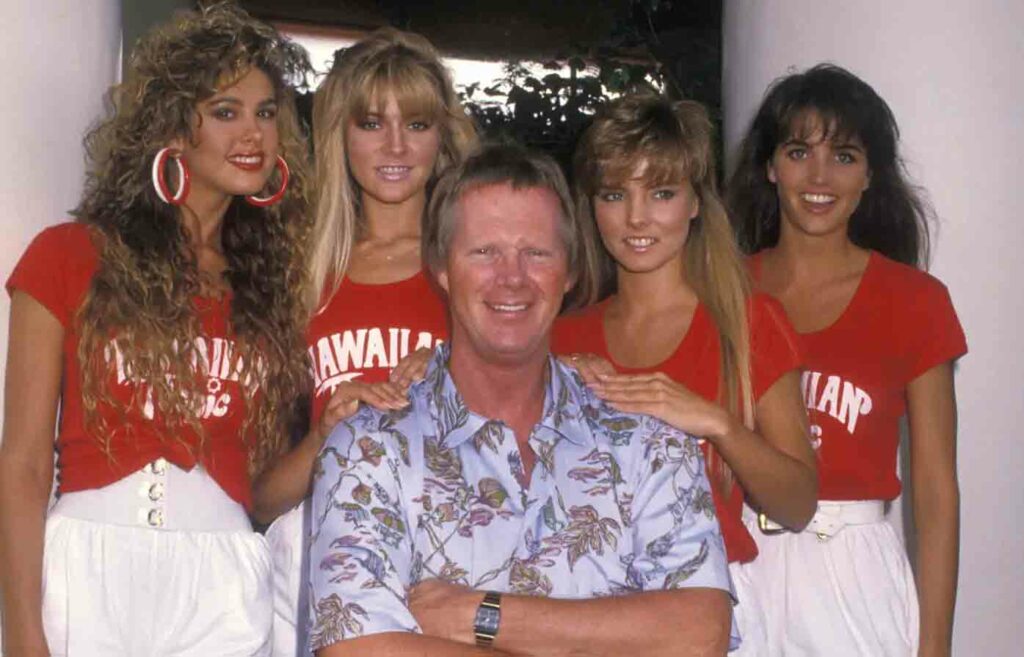 Ron Rice with a group of Hawaiian Tropic models in Kauai, Hawaii, in 1988. He used his skills as a high school chemistry teacher to develop the formula for Hawaiian Tropic suntan lotion.Credit…Ron Galella/Ron Galella Collection via Getty Images. Caption: The New York Times

From The New York Times

The  high school chemistry teacher who had been trained to explore for oil, but who instead made a fortune by concocting coconut-laced suntan lotion in a 20-gallon garbage can in his garage and seductively branding it Hawaiian Tropic, died on May 19 in Daytona Beach, FL. He was 81.

His death, in a hospital, was announced by his family on Facebook. No cause was specified.

A dirt-poor boy from North Carolina’s Blue Ridge Mountains, Rice became smitten with Florida’s ocean shores while on a family vacation in the 1940s. Years later, after a visit to Hawaii, he was inspired to take on Coppertone, a leading brand of suntan lotion, which promised naturally pale sunbathers like himself that they would tan, not burn, if they slathered themselves with the product’s zinc oxide, alkyl benzoate, isopropyl palmitate and other ingredients.

After graduating from college in 1964, he transplanted himself to Florida, taught for eight years (in fleeting positions at seven schools, but long enough to acquire a draft deferment) and worked part time as a football coach and a lifeguard, positions well served by his 6-foot-3 height.

On the side, he blended myriad combinations of coconut oil, exotic fruits, aloe, avocado, kukui, mineral oil and cocoa butter until they combined into a lotion that a few 11-year-olds he enlisted from the neighborhood poured from that foundational garbage can into bottles labeled Hawaiian Tropic and sold for the first time on the beach on July 20, 1969. (Coconuts weren’t native to Hawaii and were probably originally cultivated on islands in Southeast Asia, but the name Tropic Tan was already trademarked.)

Rice sold Hawaiian Tropic to Playtex Products for $83 million in 2007.

“Suntan is sex,” he once said. “That’s what it all boils down to. Sex and vanity.”

The family lived on a mountain. From the time Ron was 5, he would join his siblings at their roadside stand selling apples, cider, honey, grapes and Christmas wreaths to supplement their father’s income as a civil engineer.

He earned a Bachelor of Science degree from the University of Tennessee in Knoxville, where, according to several accounts, he was studying to explore for oil and uranium, and to be a teacher.

“I used to teach school and I used to make $4,300 a year. Four thousand of that was the teaching part, $300 was the coaching part,” he once told a TV interviewer. “I did that for eight years. I could go back to that if I had to, but I’m not saying I want to go back.”

“It’s fun,” he said of his balmy lifestyle, lubricated with Hawaiian Tropic, “and there’s a lot of extra toys involved, and a lot of fun times, and I drink a little better-quality wine, of course, but I’m still a country boy.”

Information on survivors was not immediately available.

Mr. Rice’s 12,000-square-foot home in Ormond Beach, just north of Daytona Beach and not far from the lifeguard stand where he once worked, housed a disco and an indoor-outdoor pool. He owned an 80-foot yacht and a Lamborghini that he lent to Burt Reynolds for the film “The Cannonball Run” (1981).

As a reminder of his roots, and a testament to his success, Mr. Rice placed in his living room the garbage can in which he had perfected the formula for Hawaiian Tropic. He had it silver plated.