The limitations of coatings for corrosion prevention

Why don’t coatings always prevent corrosion of the coating and the substrate metal? Coatings bond to metal surfaces that are a complex mixture of:

• A variety of metal atoms and non-metal atoms
• Groups of metal crystals referred to as grains
• Thin, non-metallic boundaries between the different grains
• Metal alloying components that precipitate in grain boundaries and inside grains
• Atomic structural defects within grains, such as missing metal atoms and lines of atoms

Complete metal surface coverage by a coating requires that it bonds to all materials on the surface. However, complete bonding rarely occurs, creating coating defects.

This column will discuss the most common defects in coatings—holes, solvent pops, pores, voids and pore-void combinations. For simplicity, I’m also going to collectively refer to coatings and laminate films as coatings.

Figure 1 provides a photomicrograph of a hole through a coating that leaves the substrate metal completely exposed. 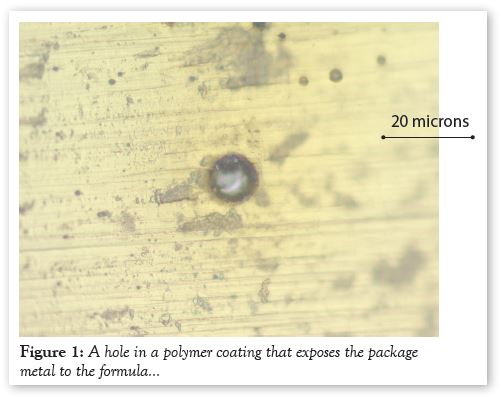 It’s tempting to conclude that the hole in Figure 1 will cause pitting corrosion. However, coating-holes are very common. I’ve observed numerous instances where no pitting occurs in the holes; alternately, I’ve seen pitting corrosion occur where there are no holes. Indeed, pitting corrosion typically only occurs in a hole when there is also a large area of corroding coating surrounding the pit.

Figure 2 provides an example of a coating solvent pop. Notice that the solvent pop is approximately five times larger than the hole in Figure 1. 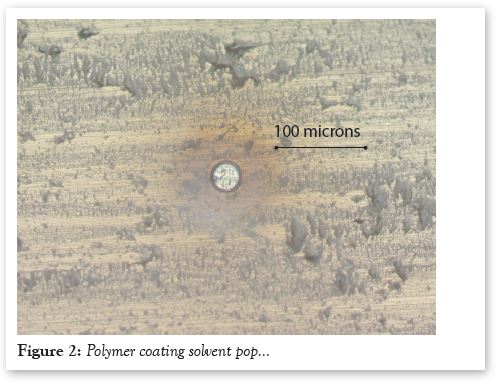 The thin cap over a solvent pop is usually quickly removed after a package is filled. However, metal pitting corrosion or coating delamination in a solvent pop needs to be supported by a large surrounding area of corroding coating.

Pores and voids are microscopic and difficult to observe. Indeed, coating voids are typically detected indirectly with analytical methods, such as positron annihilation.

The diagram in Figure 3 illustrates the possible pores, voids and pore-void combinations in coatings. The blue lines in Figure 3 depict pores; the blue ovals and the irregular blue shape depict voids.

1. This depicts a pore that eventually ends as a coating void. Liquid fills the void by capillary action and the chemical composition of the liquid is typically significantly different from a bulk formula’s composition.
2. This illustrates how pores can meander throughout the coating without ending at a void. Both examples #1 and #2 will cause coating corrosion with subsequent loss of barrier properties. 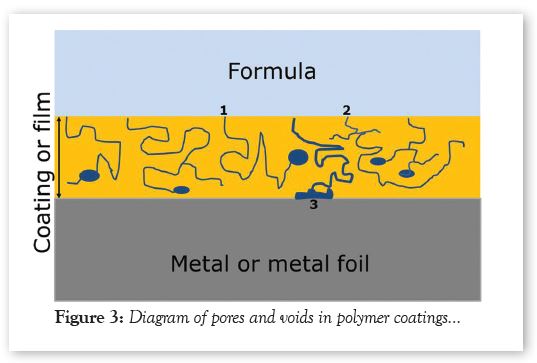 3. This illustrates how a pore could provide continuous contact between a formula and the metal under the coating, with liquid accumulating at the metal-coating interface. Metal corrosion and coating delamination, such as blisters, could occur when the liquid moving through the coating is corrosive toward the metal; sufficient liquid accumulates at the metal-coating interface; or the volume of liquid continuously moving through the rivers is large enough to sustain metal corrosion.

The chemical composition of a formula, type of package metal and type of coating all interact to determine:

Thanks for your interest and I’ll see you in July. Contact me at 608-831-2076, [email protected] or from our two websites: pairodocspro.com and aristartec.com. SPRAY