I’ll pick up where we left off with a continuation of how higher temperatures actually affect polymer and metal corrosion. 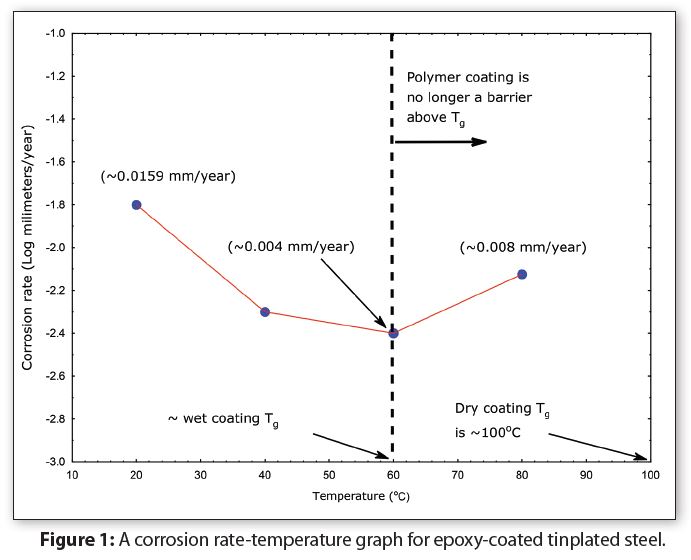 The reason why the Arrhenius equation does not predict corrosion for coated metals is because polymer corrosion is a complex interaction between absorption of water, molecules and ions into and through the polymer, plus breaking metal-polymer bonds. In other words, polymer-corrosion is not a first order reaction.

Notice in Figure 1 that the wet-epoxy Tg is approximately 40°C (104°F) lower than the dry-epoxy Tg. The wet coating corrosion rate increases as temperature is increased because the wet-epoxy is no longer a protective-barrier between the formula and the container metal. Both polymer and metal corrosion occurred in this situation. In other words, exceeding the coating glass transition temperature causes coated tinplate corrosion. Consequently, Figure 1 also helps to explain why coated metals sometimes appear to have significantly more corrosion at higher storage temperatures.

To summarize, polymers lose their properties—including corrosion barrier-protection—when the temperature is at and above their Tg. Thus, higher storage test temperatures subject package polymer materials (coatings) to temperatures above the wet-polymer Tg, with the result that the polymers no longer have their original corrosion-barrier protection property. In this situation, the corrosion at a higher temperature is not indicative of actual corrosion.

Both metal corrosion and polymer coating corrosion are not pure chemical reactions and both types of corrosion rarely meet the two requirements for valid use of the Arrhenius equation. Consequently, higher temperatures rarely accelerate the corrosion of the metals, internal coatings and laminated films used for spray packaging.

Products may be exposed to higher temperatures while being transported or stored during the Summer months. However, actual exposure times at higher temperatures are often short, because peak daily temperatures typically only last for a few hours every 24 hours. Thus, the majority of filled spray packages spend most of their service lifetime at or near room temperature (assuming no long exposures to direct sunlight).

Figure 2 shows a graph of the hourly temperatures for Middleton, WI for 24 hours during Summer (Source: National Oceanic & Atmospheric Administration). Indoor temperatures are typically 5–10 degrees lower than the outside temperatures, so Figure 2 includes a simulated graph for indoor temperatures. 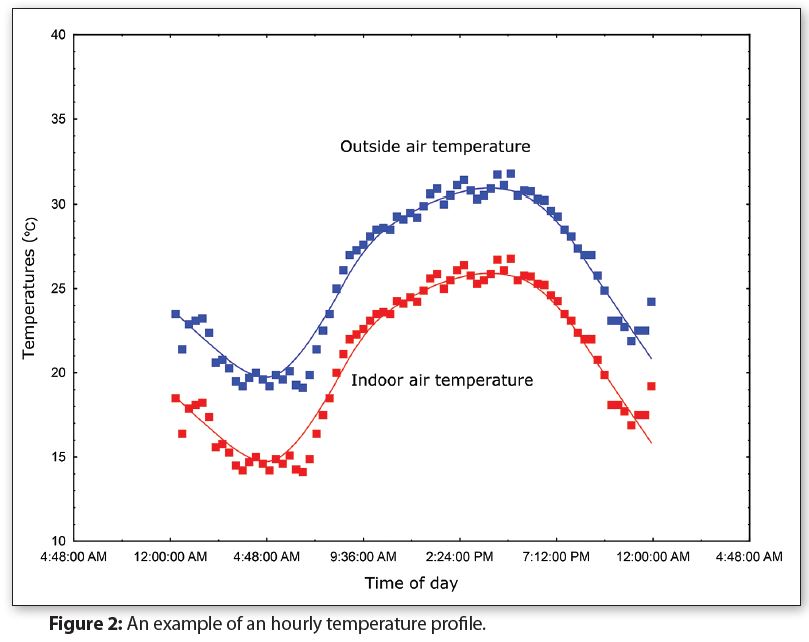 Please keep in mind that these times and temperatures do not simulate one, three and 36 years of package corrosion.

Summary & conclusions…
There is no reliable way to accelerate spray package corrosion rates. However, electrochemical corrosion testing can provide accelerated results because sensitive electronic instruments detect corrosion much sooner than it can be observed with either the unaided eye or a microscope. In some instances, a comprehensive company knowledge database also allows reduction of the number of variables in a corrosion test without increasing the risk of unexpected package failure. Higher temperatures for storage tests should be used to determine product stability at higher temperatures but not to accelerate package material corrosion.

Thanks for your interest and I’ll see you in December. Contact me at 608-831-2076, [email protected] or from our two websites: pairodocspro.com and aristartec.com. SPRAY