Home > February 2013 > Back and Forth—Harmonization?

I recently received a phone call from a client that had been shipping aerosols by vessel for years. They claimed that their shipment was stopped because it was not properly classified for transportation. I was shocked. I rushed back to the office to open the heavy fiberboard containing the latest versions of the International Maritime Dangerous Goods (IMDG) Code, Amendment 36-12. I had received five sets of the shiny new Code shortly before the December holidays, but like most people, I was caught up in the rush and didn’t open them until the first week back in the office in the New Year.

I threw Volume 1 aside and tore into Volume 2, scanning the Dangerous Goods List (DGL) for UN1950, AEROSOLS. When I finally came upon the page in question (p. 98), I was shocked! There was only one entry in the DGL for UN1950, AEROSOLS. The hazard class listed was Class 2. It seems as though the steamship line that refused the shipment may have been correct!

The previous edition of the IMDG Code contained more than 20 different entries for UN1950, including iterations for Divisions 2.1 (flammable) and 2.2 (non-flammable), subsidiary risks of 6.1 (toxic) and 8 (corrosive), and every possible combination thereof. Also included in Amendment 35-10 were entries for UN1950, WASTE AEROSOLS. 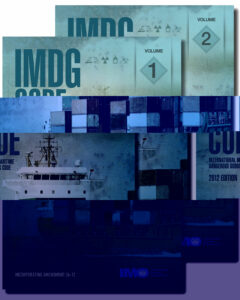 me to reflect back on a brief period of time where, during one or two iterations of the Code, limited quantities of aerosols were classified and described as AEROSOLS, 2, UN1950, LTD QTY. I distinctly remember that the lack of a division (Class 2 vs. 2.1 or 2.2) created quite a stir among shippers and carriers. Eventually, everyone became used to it and then in the next amendment, the divisions were broken out again.

Now, I’m wondering if we really are moving toward harmonization between countries and modes of transportation, or if the International Maritime Organization is going off on a tangent (which they have done from time-to-time)? At first glance, I became really annoyed. How does the government expect shippers and carriers to comply if they keep changing the rules?

Additionally, although there is a one-year transition phase for compliance with the new IMDG Code, Amdt. 36-12, many steamship lines have already begun to implement the new Code. No surprise there, because the two previous Amendments, Amdt 34-08 and Amdt. 35-10, became mandatory shortly after being published and a transitional period was not offered.

However, upon closer inspection, I see that there is, in fact, a one year transition period with the new IMDG Code. Compliance with Amdt. 36-12 is voluntary as of Jan. 1, 2013 and does not become mandatory until Jan. 1, 2014. Whew—a reprieve!

As it turns out, the latest amendment of the IMDG Code actually hides all of the “fine print” in the Special Provisions within Chapter 3.3 of Volume 2. Although the previous Amendment (35-10) also listed the same Special Provisions, most people didn’t really pay any attention to the finer details. Every different type of aerosol had its own entry in the table and the class/division and subsidiary risk were clearly laid out.

It is more critical than ever that you now actually read and understand the minutia within these Special Provisions. If you rely only on the Dangerous Goods List for the description, as the carrier did in this case, you may be in violation of the U.S. DOT’s Hazardous Materials Regulations and those standards for any country that requires compliance with the IMDG Code.

For example, Special Provision 63 of the IMDG Code clearly states that:

The division of Class 2 and the subsidiary risks depend on the nature of the contents of the aerosol dispenser. The following provisions shall apply:

1. Class 2.1 applies if the contents include 85% by mass or more flammable components and the chemical heat of combustion is 30 kJ/g or more;

2. Class 2.2 applies if the contents contain 1% by mass or less flammable components and the heat of combustion is less than 20 kJ/g;

4. Gases of class 2.3 shall not be used as a propellant in an aerosol dispenser;

6. Aerosols with contents meeting the criteria for packing group I for toxicity or corrosivity shall be prohibited from transport.

7. Except for consignments transported in limited quantities (see chapter 3.4), packages containing aerosols shall bear labels for the primary risk and for the subsidiary risk(s), if any.

Flammable components are flammable liquids, flammable solids or flammable gases and gas mixtures as defined in Notes 1 to 3 of sub-section 31.1.3 of Part III of the United Nations Manual of Tests and Criteria. This designation does not cover pyrophoric, self-heating or water-reactive substances. The chemical heat of combustion shall be determined by one of the following methods ASTM D 240, ISO/FDIS 13943: 1999 (E/F) 86.1 to 86.3 or NFPA 30B.

Therefore, I urge all shippers, carriers and forwarders to carefully read the Special Provisions of the current IMDG Code, Amdt. 36-12. Be prepared to educate the ocean carrier, non-vessel operating common carrier (NVOCC), or freight forwarder as to the latest requirements, if, and invariably when, one of your shipments is held or rejected.

A copy of the Special Provisions for UN1950, AEROSOLS from the current IMDG Code Amendment (36-12) is available for download at ShipMate’s website, or by pasting the following URL into your web browser’s address bar: