The attributes of corrosion and its adverse effects on spray packaging

Hello everyone. Spray package metals, polymer laminate films and internal polymer coatings are all susceptible to corrosion. In this month’s Corrosion Corner, I’ll review several of the general attributes of spray package corrosion and the adverse effects corrosion has on both product efficacy and spray package performance. Generic types of corrosion There are two categories of corrosion: general and localized. General corrosion occurs over relatively large areas of a spray package, such as detinning in tinplated steel aerosol containers.

Pitting corrosion of metals and metal foils, plus blistering of laminate films and internal polymer coatings are the most common forms of localized corrosion. Pits and blisters are typically very small and randomly distributed around the spray package.

Corrosion attributes: Time & corrosion
General corrosion typically starts soon after a spray package is filled with product. Polymer blisters and pitting corrosion typically require an incubation period to reach a critical size where the blister or pit is able to continue growing at a stead state rate. 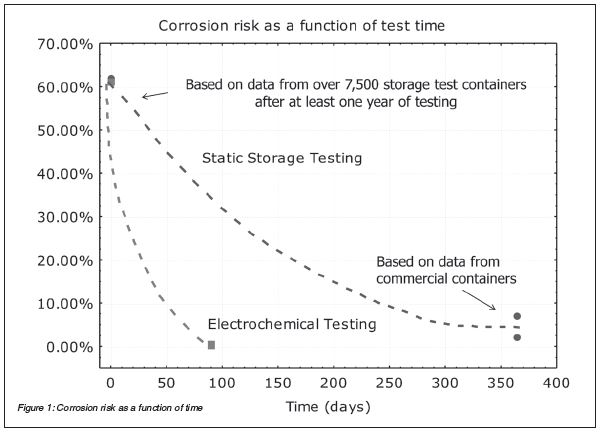 Pits that grow at their steady state rate will eventually perforate the package metal or metal foil. Blisters can grow and eventually cause large areas of polymer film or polymer coating to separate from the substrate metal foil or metal, respectively.

The rate of pitting corrosion is not a function of its incubation time and the rate could be very low or very high. In other words, a pit that requires nine months to incubate could perforate the container after 12 months or after three years. Thus, containers having very low pitting rates could have a suitable container service lifetime in spite of the pitting corrosion, and containers with very high pitting rates would not have suitable container service lifetimes.

Corrosion attributes: The risk of corrosion
Figure 1 has two graphs of the corrosion risk as a function of time for the traditional storage test and electrochemical corrosion testing. The nocorrosion-data risk for both graphs is based on storage test data collected on over 7,500 aerosol test containers that were at least one year old.

The one-year risk data for storage tests was developed from a survey conducted on commercial aerosol products. The 90-day risk for electrochemical testing was developed from over 600 comparisons between results from electrochemical tests and actual commercial container corrosion. We have not yet developed a similar risk-time profile for spray packaging that uses laminated aluminum foil.

Notice that the no-corrosiondata risk is around 62% (no data is available at time zero). In other words, there is an approximately 62% risk of aerosol container corrosion.

Figure 1 emphasizes the importance of corrosion testing for new products and line extensions using spray packaging. Figure 1 also emphasizes that the lowest risk is achieved only after the appropriate test time length.

Pitting corrosion could cause leaking of the product and/or propellant. Propellant leaking could produce a package that is mostly or partially full but does not spray.

Please send your questions/comments/suggestions to [email protected] or visit www.pairodocspro.com for more information. Thanks for your interest and I’ll see you in July. Back issues of Corrosion Corner are available on CD from Spray Technology & Marketing.