The human skin—our largest organ—is an effective barrier, preventing the excessive loss of body water as well as providing protection from contamination by microorganisms, environmental pollutants and solar radiation. There are actually 11 types of skin (palms, forearms, lips, etc.) enabling it to efficiently perform its complex functions. As we age, the skin becomes thinner, fine-line creased or wrinkled and less able to retain normal levels of water. A condition known as dry skin (xerosis) develops when the moisture content decreases to less than about 15%. 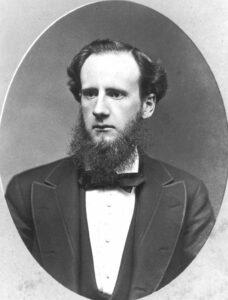 Dry skin—often accompanied by flaking of the top stratum corneum (SC) layer—causes splits, itching, roughness and stiffness, and affects most people over the age of 75 years to varying degrees. Much younger people can also be afflicted, depending on heredity and lifestyle factors. Dry skin has been recognized for over a thousand years, but was first treated as a disease in 1874 by Louis Adolphus Duhring, a Professor of Dermatology at the University of Pennsylvania. Prof. Duhring named it “pruritus heirmalis” or “Winter Xerosis.” Since then, many thousands of books and articles have been published on dry skin and still there are numerous aspects of dry skin remaining to be addressed.

The billion aerosol unit market for water-based personal care products includes commodities such as shave cream, mousse, anti-aging cream, facial cleanser and so forth. Nearly all of these products include glycerin, or sometimes sorbitol humectants at about 3–6%, to soften, plump and moisturize the skin. Pump-action gels and lotions are similarly formulated. Product labels often carry the word “moisturizers”—an imprecise term, but more easily comprehended by consumers than “humectants” or “emollients.”

Moisture retention
The skin gains moisture from the underlying blood supply. It loses moisture by surface evaporation and perspiration. In aged skin, the lipid barrier may be depleted and more porous, allowing more moisture to escape. The lipid bi-layer between the corneocyte plate-like cell structures fills those extracellular spaces with oily and protease ingredients that provide the water barrier. If these lipids are partly removed by alcohol, detergent solutions or even hot water, the bi-layer is damaged and transdermal water loss (TDWL) intensifies. The result is dry skin. 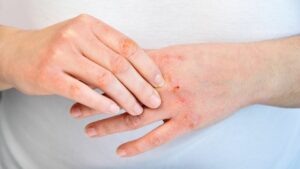 A number of common activities can produce stiff, cracked and dry skin. For example, showering more than once per day—especially with hot water above 95°F for several minutes—will often result in dry, itchy skin. After the surface water is removed with a bath towel, the depleted lipid bi-layer will allow excessive evaporation of inter-cellular moisture, typically reducing the skin content from about 35% to below 15%. Replacement of the dissolved, free, fatty acids, triglycerides and other displaced lipids is a relatively slow process.

Nurses and other caregivers often wash their hands frequently, using bar or liquid soap and hot water. Some lipids are emulsified and washed away in that process. Hand washing has recently become even more common as a means of limiting possible COVID-19 infections. As a result, dry, stiff and cracked hands are a significant problem, particularly for those with sensitive skin. Replacing or following soap with a lotion containing moisturizers is usually a good solution.

Current hand sanitizers typically contain about 75% ethanol as the active ingredient. However, ethanol is a good solvent for lipids, so these products can lead to dry skin of the hands if over-used. A brief label check will reveal if the sanitizer formula also contains a humectant. Due to COVID-19, pump-action sanitizer lotions have quickly become popular and can be seen in the lobbies and reception stations of clinics and other public buildings.

The itch syndrome
Possibly the most frustrating manifestation of dry skin is the itch. As a rule, itching invokes rubbing or scratching, opening the skin to bacteria, such as S. aureus or other contaminants. Scratching often provides a minute or two of relief, followed by a resumption of the itch, lasting for 15–30 minutes. Although more research is needed, the itch seems to originate with the epidermal C nerve fiber depolarizing in response to structural changes, like swelling, in the stratum corneum. The nerve response travels through the spinal cord to the brain, which reacts by forming the itch.

While xerosis (dry skin) conditions create most itch dermitosis, other diseases may also produce itching. Pruritus may cause itching in older people. There is also the uremic itch, those from human immune-deficiency virus (HIV) infections, and so forth. In all cases, the itching areas are indiscriminate; they may travel from the upper arm to the lower back and then to the lower legs, as an example. Itch sites in the scalp and forehead may have cosmetic implications, such as rough, scabrous skin areas.

Moisturizer ingredients
A large number of natural and synthetic organic chemicals are used as moisturizers in cosmetic and pharmaceutical formulations. They are usually divided into humectants and emollients, although as many as four groups have been identified on the basis of their interactions with the skin. Whether the product is identified as for anti-aging, skin care, moisturizing or a sunscreen, a major objective is to implant about 35% moisture in the stratum corneum, while also keeping that skin layer continuous.

A recent study has shown that combinations of humectants and emollients provide better moisturization than ingredients from a single group. For example, combinations of glycerin, hyaluronic acid and lactic acid gave superior results when combined with petrolatum, lanolin or fatty ingredients.

Many moisturizing products also include antioxidants in their formulations that act to neutralize oxygen-free-radicals produced by ultraviolet sunlight. Antioxidants may include superoxide dismutase (SOD), ginseng, vitamins C and E, coenzyme Q10 and lycopene. They may also contain active ingredients commonly used in anti-aging or dewrinkling cosmetics. Fine lines, like facial expression hallmarks, can appears as early as age 25 for those with substantial environmental exposure, smoking or alcohol abuse problems. Humectants and emollients act to swell, smooth and plump the skin, often eliminating fine lines in the process.

The most provoking symptoms of dry skin are facial roughness and areas of itchiness. Facial problems can often be addressed by the use of moisturizer lotions and limiting exposure to hot water or soap dispersions. More aggressive techniques are available, including Botox injections, laser re-smoothing, micro-dermal abrasion and alpha hydroxyl acid (AHA) skin peeling. Lotions are also available to control itching. A popular product is formulated as:

Other active ingredients may include retinol and its derivatives, vitamin C, vitamin E,
niacin and panthenol. They can be supported by such moisturizers as sodium hyaluronate,
glycerin, petrolatum, shea butter and fatty acid ester emollients like isopropyl
myristate. Petrolatum is probably the most effective moisturizer yet known, although
African shea butter is rapidly gaining in popularity. The skin contains both fatty acids
(C16 to C38) and fatty acid esters, some of which can be washed away with hot water
or soap dispersions and need to be replaced to control TDWL.

The skin of older people is thin and fragile and often suffers from loss of collagen. It needs special protection and care, otherwise all sorts of maladies can affect it, such as dry skin, inflammation, bruising, cuts, itching, small sores and even skin cancers. Some reports suggest that  aspirin may exacerbate these problems. Possibly the most effective therapy is to apply a spray or rub-on moisturizer to one’s body when it is still damp from a shower. This helps to lock in absorbed moisture before most of it can evaporate. Results can be perceived in terms of skin smoothness, more elastic texture and itch minimization.

Moisturizing agents vary in their potency. Isopropyl myristate has sometimes been called “the gold standard” and is typically used at about 3–4%. Petrolatum is equally effective, but its oily feel needs to be suppressed by other ingredients, such as glycerin, or a blend of glycerin and hyaluronic acid.

With so many moisturizers and related ingredients available for skin care sprays and lotions, many formulators have produced products with 20 or more components. Anti-itch and similar products are most often packaged in plastic pump-action units, holding about 8oz. Their aerosol counterparts are generally presented in aluminum bag-on-valve (BOV) containers, typically filled to about 6oz. The formulations always contain thickeners, such as Carbomer 940 and PEG 9100 to stabilize the emulsion.

Critical to skin care
Maintaining about a 20–40% TEWL level is critically important to skin care. At low levels, especially 7–15%, xerosis will develop, leading to roughness, irritation, itching and other problems. Skin moisturizers are quite popular as a means to avoid these events. In fact, they are said to be used by 85–90% of mature women. A large number of substances are available, such as occlusive agents, humectants and emollients, and combinations are more effective than singular moisturizers.

Itching is a major attribute of dry skin. The abnormality is picked up by the topical C nerve fibers and generally causes scratching, through which relief is only temporary and the skin may be abraded or cut in that process. Applying a moisturizer or anti-itch lotion is a more reasonable approach. SPRAY